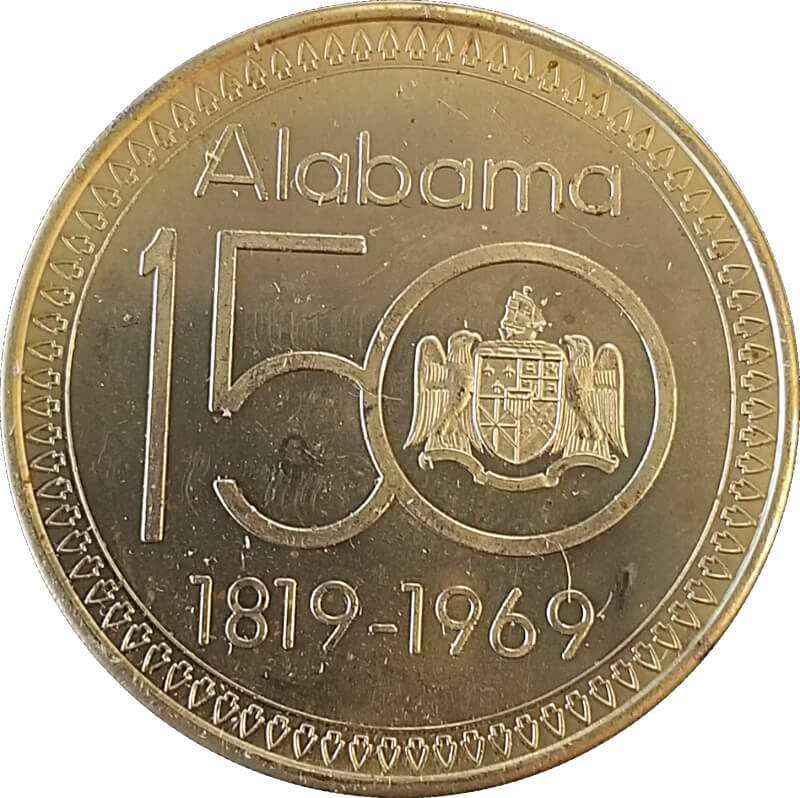 Here is a completely unexpected find at Jefferson Coin Shop  in Charlottesville, VA that I bought last week. I had gone to get a type II ASE but I looked in the bargain bin and found this. Well, as a proud graduate of THE University there, I couldn't pass it up. I knew nothing of the existence of this token and I have yet to learn about who minted these, but I did find the following information.
On the obverse we see Chief Tuskaloosa, though in Tuscaloosa I have seen the Chief's name most often spelled Tushkaloosa, and there are references to it spelled as Tascaluza. He was a great chief of the Mississippian Indian Culture and met Desoto (the Spanish Explorer in the Battle of Mabilia in 1540. It is not known precisely where the battle occurred but it is theorized it occurred near today's Selma. Despite inflicting heavy casualties on the native people, Desoto was totally routed and the journey did not end well for Desoto who died in 1542.
The token weighs 12.2 grams and is 34 mm in diameter. It is composed of bronze. The Obverse and Reverse have a medal alignment.  It was minted in 1968 and its rarity is 93. Apparently, there was also a silver token issued as well.

Great pick up Bama ! Hopefully you will find out who minted it!

Learning from you is an honor. You teach way beyond what others perceive. Very nice THANKS

Nice! Never a bad idea picking up the unusual.

Nice medal and kind of mimics the Arkansas commemorative half with the overlapping portraits, with the native American in the background.

Something fun to have in your collection.

I wish I could discover who minted it!

Very nice token Bama, I especially like the little arrowheads around the rim on the reverse.

Really interesting token. The misc. Bins do have some interesting finds sometimes. Great pickup. Thanks for showing us something we would of never known about.

Nice token! You never know what you are going to find in the bargain bin! ; )

Just goes to show you every token coin and medal tells a story. The history is great and it's a nice token. Can't beat collecting. Thanks for the info!!