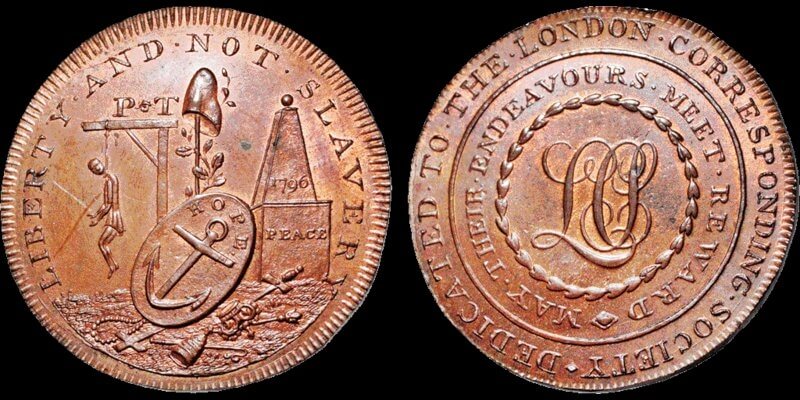 02 Jun 2017
I know Mike recently wrote a blog on Conder Tokens but I wanted to add my own and share some of my favorites.

Conder Tokens, also known as 18th Century Provincial Tokens, are a form of privately minted token coinage struck and used during the latter part of the 18th Century and the early part of the 19th Century in England, Anglesey and Wales, Scotland, and Ireland.

The driving force behind the need for token coinage was the shortage of small denomination coins for everyday transactions. However, the demand was fueled by other factors such as the Industrial Revolution, population growth, and the preponderance of counterfeit circulating coins. Because the government made little effort to ameliorate this shortage, actually King George III halted the production of copper coinage in 1775. It was estimated at the time that 3/4 of all coins in circulation were counterfeit leading to public distrust of the coinage.

Private business owners and merchants took matters into their own hands. The first tokens of this type were issued in 1787 to pay workers at the Parys Mine Company. By 1795, millions of tokens of more than 10,000 designs of varying designs had been struck and were in common use throughout Great Britain.

One of the most prolific producers of these private tokens was Matthew Boulton. In fact, during his lifetime Boulton would strike millions of these merchant pieces. Boulton was no stranger to the manufacture of small metal items, having grown up with and managed his family business for many years. In the mid-1780s Boulton had turned his attention to coinage. In his eyes coins and tokens were just another small metal product like those he had manufactured for years. He also had shares in several Cornish copper mines, and had a large personal stock of copper, purchased when the mines were unable to dispose of it elsewhere. However, when orders for counterfeit money were sent to him, he refused them: "I will do anything, short of being a common informer against particular persons, to stop the malpractices of the Birmingham coiners." In 1788 he established the Soho Mint as part of his industrial plant. The mint included eight steam-driven presses, each striking between 70 and 84 coins per minute.

Boulton spent much time in London lobbying for a contract to strike British coins. In June 1790 the William Pitt Government postponed a decision on recoinage indefinitely. Meanwhile, the Soho Mint struck coins for the East India Company, Sierra Leone and Russia, while producing high-quality planchets, or blank coins, to be struck by national mints elsewhere. The firm sent over 20 million blanks to Philadelphia, to be struck into cents and half-cents by the United States Mint.

The national financial crisis reached a point of despair in February 1797, when the Bank of England stopped redeeming its bills for gold. In an effort to get more money into circulation, the Government adopted a plan to issue large quantities of copper coins, and Lord Hawkesbury summoned Boulton to London on 3 March 1797, informing him of the Government's plan, and he was awarded a contract at the end of the month. According to a proclamation dated 26 July 1797, King George III was "graciously pleased to give directions that measures might be taken for an immediate supply of such copper coinage as might be best adapted to the payment of the laborious poor in the present exigency". The proclamation required that the coins weigh one and two ounces respectively, bringing the intrinsic value of the coins close to their face value. With the return of large quantities of government issued small denomination. Twopence and pennies were minted at the Soho Mint in 1797 and halfpennies and farthings followed in 1799.

By 1802, the production of privately issued provincial tokens had ceased. However, in the next ten years the intrinsic value of copper rose. The return of privately minted token coinage was evident by 1811 and endemic by 1812, as more and more of the Government issued copper coinage was melted down for trade. The Royal Mint undertook a massive recoinage program in 1816, with large quantities of gold and silver coin being minted. To thwart the further issuance of private token coinage in 1817 an act of parliament was passed which forbade the manufacture of private token coinage under very severe penalties.

There are many different ways to collect these. To assembly a complete set would probably be impossible. Many people collect by issuing location or theme. I tend to just collect the ones that strike my fancy. Most issues can be found in circulated condition for well under $100. Many of these were saved when minted because of there beauty and there were some issues made specifically for collects. Due to this uncirculated specimens are easy to find for a lot of this issues but can get pricey.

Thank you for this info and the link to your site.

I love Conder tokens, and I have . . . well, at least four that I can recall -- I don't have access to my records right now, but I'm pretty sure I have four. ANYWAY, the designs of these tokens can be absolutely breathtaking -- I don't blame the people who held theirs back and never spent them. I probably would, too, if I had enough money otherwise! I'm somewhat obsessed with King George IV, who was the Prince of Wales during the provincial/trade tokens' heyday, so I keep my eyes open especially for coins that feature his head and/or the symbols of his position as the Prince of Wales -- the motto "Ich Dien", and the three feathers surrounded at their base with a coronet. I'm also drawn to tokens featuring a large, intricate monogram of some sort -- my first token, a 1787 Anglesey "Druid head" penny, has a "PMCo" monogram on the reverse, and I almost find it more beautiful than the hooded, oak wreath-encircled Druid's head itself! Thanks for another informational post and those stunning examples of how trade tokens were often also works of art.

Wow! They are all beautiful! Tokens are something I have thought about collecting myself... : )

beautiful tokens, all of them

Thoroughly enjoyable blog. Love all the photos, too. I have never seen so many of those before. Wow!

These are nice tokens and so historical. I may have to check these out in more detail, with all these blogs & enthusiastic collectors! Thanks for this!

Excellent blog. I knew it would be. It covered everything I wrote in my blogs. The beauty of these coins you have to hold to believe. Pictures can do them justice but to hold one is like holding a piece of art. The masters captured there country and famous people so well people didn't spend them that's why so many are in uncirculated condition today. Thanks for everything as a conder collector I enjoyed every word. Mike

Conder tokens are beautiful to look at and beautiful to study. Thanks for the blog and the pictures. One thing that I have not looked into enough to understand is Conder tokens versus Davis Tokens. I think Davis tokens chronologically follow Conder tokens. A few years ago I bought a shoe box of "old coins." I thought I had some Conder tokens. When I asked an "expert" at an ANA show he told me that some were Conders and some were Davis!! I didn't and still don't understand the line of demarcation . But this is an example of me not following the advise to buy the book before buying the coin.

The basic qualifier is if Conder or Dalton and Hamer put it in there books it's a Conder (provincial) token. If it's not in the book, then it is a trade token.