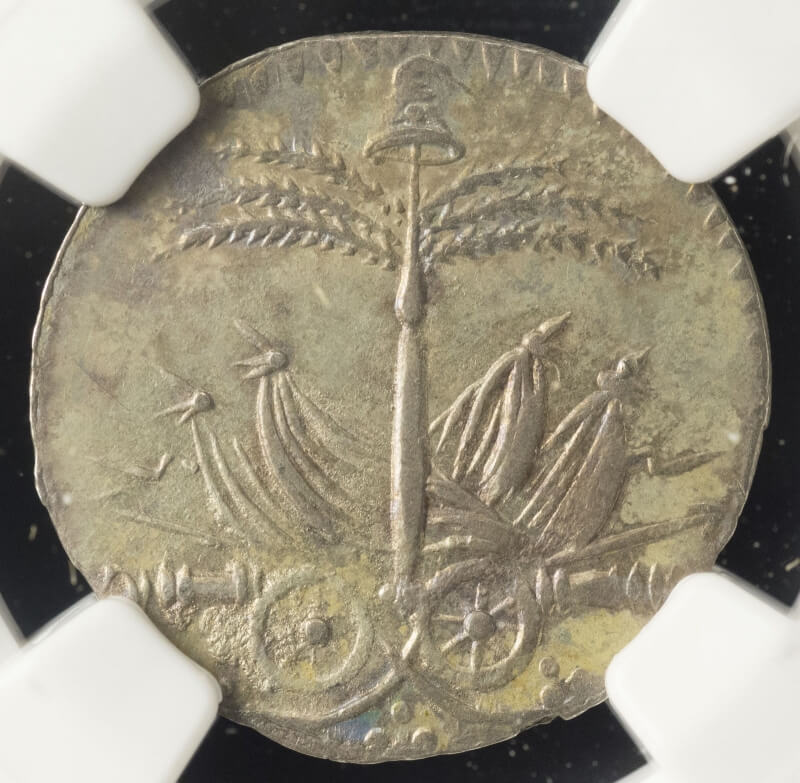 Although Haiti doesn’t have the strong numismatic history that many countries due they have had a number of interesting designs. This 25 Centimes silver coin is from 1815 and the reverse depicts a rendition of the national coat of arms. The coat of arms of Haiti was originally introduced in 1807.

It shows six draped flags of the country, three on each side, which are located before a palm tree and cannons on a green lawn. On the lawn various items are found, such as a drum, bugles, long guns, and ship anchors. Above the palm tree, there is a Phrygian cap (liberty cap) placed as a symbol of freedom. On the lawn between the drum and the ribbon there were supposed to be two pieces of chain with a broken link symbolizing the broken chain of slavery.

On the actual coat of arms was a ribbon that bears the motto: L'Union Fait La Force. The motto, in French, means 'Strength through unity'. The symbol remained in use until 1849, when President General Faustin Soulouque crowned himself as Emperor Faustin I. At the same time he adopted new Imperial arms, showing two cannons and a French imperial eagle. Two lions were used as supporter and the whole placed in a purple mantle.

The emperor was forced to leave the country in 1859, after which the old symbol was restored. Ever since the composition has been the same, but the colors and items have changed somewhat.

The obverse depicts a snake biting is own tail also known as an ouroboros. This is an ancient symbol for eternal return, or constant re-creation.

Until recently, there has been a large amount of the 1907 50-Centimes pieces still in circulation in Haiti.

A great post thanks for the work you did. I don't have any coins from there but I have never seen them.

Nice coin and history lesson! Thanks for sharing! Never seen this one before.

Very Interesting coin although seems to me to be overgraded

It looks better in person. These tend to be poorly struck so I believe the grade is pretty accurate.