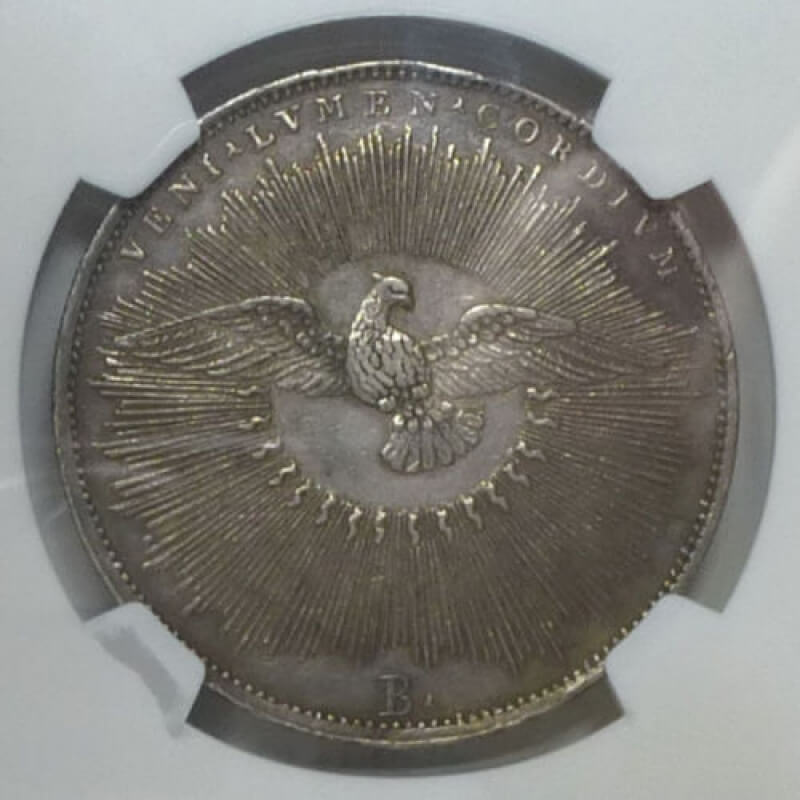 This 1830 coin was struck upon the death of Pope Pius VIII. He had been a popular choice for pope for many years but had been passed over several times possibly due to his chronic poor health. He was finally elected at the Papal Conclave and his coronation was April 5th, 1829. His reign was short due to his death on November 30th, 1830.

Pius VIII was in very poor health from his election until his death one year after the conclave. Prince Don Agostino Chigi, a contemporary of the late pope's and one of the papal nobility associated with the papal court, recorded in his diary:

(Translation: "During the dissection of the Pope's body, which occurred yesterday evening, as far as they say, only very healthy internal organs (viscera) were found, except some weakness of the lungs, or, according to others, a tired heart; it is therefore impossible to know the cause of death.")

These few words have been interpreted by conspiracy theorists as evidence that the late pontiff had indeed been poisoned.  I find this to be a little unrealistic because he was described as being sickly for years before becoming pope.

The Obverse of this silver coin features the Cardinal Arms and reverse has a radiant dove design.

Beautiful. The Sede Vacante basic design is still being used.

Cool coin, cooler history! Thanks for sharing this, but to me the dove looks more like an eagle

Great coin! Thanks for the history. The coin can be beautiful but if you don't know about it then it's just a coin. You did your homework and thanks for that. Now I really appreciate the coin. I took latin for four year's can't remember much now thanks for the translation! Good work.mike

Interesting! Thanks for the article. It is an amazing medal. Another true piece of history!

Really amazing coin. What hangs off of the handles of the crossed keys? Just a decoration, or some religious symbol maybe? And the rooster with the star in the field, I have never seen that before. And a dove instead of an eagle, really very beautiful. Thanks for the "backstory" and the photos. It sets one dreaming that's for sure.