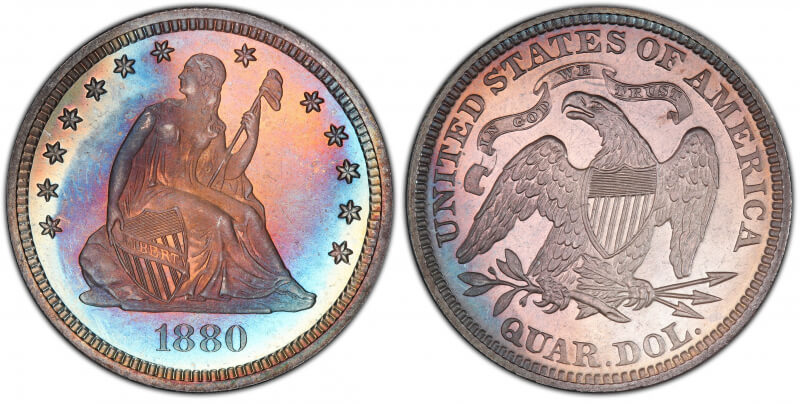 In 1796 the first quarters were minted.  The design used was the draped bust design.  This design was used for pretty much all of the other silver denominations.  On the quarter the draped bust design was used from 1796 to 1807.  The mint then stopped minting quarters during the years 1809 to 1814. The began production again in 1815.  The new design that was used is known as the capped bust design.  There are two types of capped bust designs but basically they are identified with the planchet.  During 1815-1828 the quarters were larger.  The diameter was shrunk  in 1831 and was kept like that for the rest of the series.  The seated liberty quarters began in 1838 and the series ended in 1891.  The seated liberty quarter's mintages are less than the dime and half dime making the quarter a bit rare than the dime and half dime.

The design like the dime, half dime, half dollar, and were the design originally came from the dollar.  Liberty is seated on a rock with a pole in her left hand and a liberty cap on the top of the pole.  A number of stars surround liberty and the date is underneath the seated figure.  Her left hand holds a shield with the word LIBERTY written across it.  The reverse has UNITED STATES OF AMERICA around it a eagle facing left holding in its right talon a olive branch symbolizing peace and in its left talon the eagle holds some arrows.  Some later seated liberty coins have arrows around the date this represents a medal weight change.  After a few years the arrows were taken off because everybody new that they were the lighter version of the coins.

Striking on seated liberty quarters varies from mint to mint.  The mints that struck the seated liberty coins are New Orleans San Francisco, and Carson City.  Quarters were rarer in circulation during their time than the half dime and dime.  Instead of the United States coins people liked the Spanish 2 reales.  Once the California Gold Rush was on all silver coins dried up in circulation because silver had almost become more valuable than gold.  This happened during the years of 1850 to 1853.  This hoarding caused the United States mint to decrease the weight of all silver coins hence the arrows.

Just as all the other Seated Liberty coins proofs were made at the Philadelphia mint.  In 1859 proof quarters were only made available through silver sets.  The proofs used to be able to be bought as a single coin for face value.  Assembling a full date run of either circulation or proof quarters is much more difficult than for say the dime.  Most date run sets are started at 1874 until the end of the series.

Seated Liberty are a great design. Will always be a nice collectable. Thanks

Most early coins are better. Especially the commens. Thanks.

I love this classical design! Nice blog! Thanks for the information! ; )