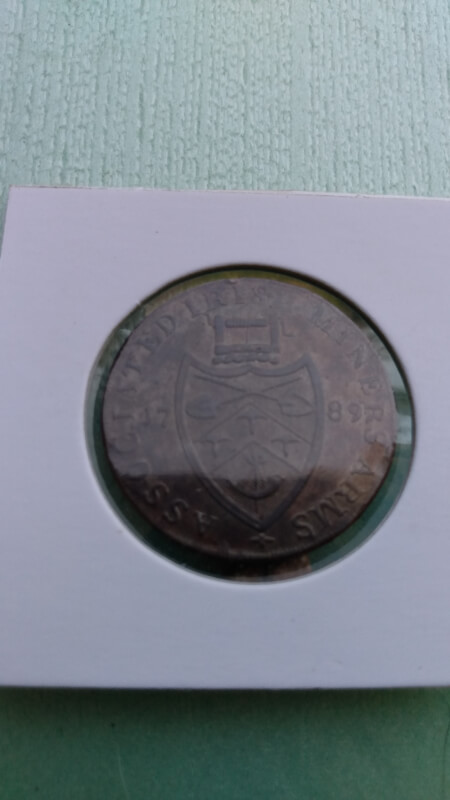 In my quest to complete the circulating coinage of my ancestors, those from Ireland, the fascinating  sub-type of coin collecting Condor Tokens drew me in when finding and buying the beauty in the images. The Cronebane-Wicklow, the subject of the week.           Enjoy!

Before beginning, it would only be befitting to thank member Mike Byrne for not only introducing me to these intriguing works of art in coin form but for the countless advice and answering of questions he has provided. I can think of no one more versed and knowledgeable  on condor tokens.

The 1789 Cronebane Halfpenny. A rather large, hefty disc of copper about the size of the U.S. half dollar. Struck at a time when imperial copper coin was  scarce for use in day to day transactions, this particular token served as payment to the Irish workers of the Cronebane copper mine in County Wicklow, Ireland. The Associated Irish Mine Company formed about 1787 for the purpose of working copper mines as well as a few other metals. It's office was located on Great Britain Street in Dublin, Ireland and incorporated by an act of Parliament in 1789, the year in which they struck their first coins. Three other known dates, 1793, 1794 and 1795 were also coined, and along with the large survival figures these actually circulated quite well. Despite the Crown putting a stop to privately issued tokens these also found their way in commerce for many years afterwards.

The obverse bears a bishop, thought to be Saint Patrick, yet no records indicate this to be the case. For the 1789 there are some dozen varieties, such as the staff and ribbon location, which indicate that as many dies were cut and modified. The reverse depicts a shield design, encircled by Associated  Irish  Miners Arms. Which seems odd for two reasons. ARMS rather than COMPANY for who issued it and the purpose of it's intended use. There are again, no records indicating that arms were provided for the miners, perhaps a reference to the shield design being the company's logo or crest.  Second, in some of the later years the phrase was changed.  Finally, edge lettering is rolled into the coin with several variations of inscription. PAYABLE IN DUBLIN CORK OR BELFAST, or on this specimen PAYABLE AT LONDON BRISTOL OR LANCASTER. While the vast majority of condor tokens were struck at the mint in Soho, England, my research confirms this one to have been designed and struck by Hancock of Birmingham, England.

The specimen in my care is more of a matte bronze than chocolate brown like most copper of this age, with undertones of red, violet and deep blue throughout when viewed in the proper light and angle. Under a 6x lighted magnifier there are no visible signs of wear, softening of some edges in the detail, but overall a cleanly struck up token. This one I am sending off to NGC to confirm my opinions as to it's actual grade, along with the correct Dalton-Hamer (DH) number. Thanks Mike for recommending that book! On it's way as you read.

Very nice coin and blog!! Thank you ....I love learning about these.

That's a beauty! Great history indeed! You had the best of the best for a teacher! ; )

Fascinating token and history! Sounds very similar to scrip paid to miners in the Appalachian coal mines in the US? Was this the intention behind these tokens? Regards Doug

Great post LB. This is most certainly my lesson for today. I have seen some mention of these tokens on Mikeâ€™s posts as well. The particular token you talk about is a fine looking specimen no doubt. Let us know how it grades. Thanks for sharing!

Great Stuff LB, Conder Tokens are a fascinating look at world in the late 1700's early 1800's. Thanks for sharing your token's story.

Beautiful. The student challenges the master. You have chosen the correct items for a history guy like you. That is an excellent book. Thanks.

You also me ruined your ancestors. I found a token with my family name on it. !! The story she lived in Dublin. And she owned a store. Tell me I wasn't shocked when I found it. I bought one and found out its in the Brutish museum!! I don't know if she's related. But it got me looking. You never know what you will find!

One of the tokens you have to have in your collection. The Bishop is the Bishop of all miners . You have edge writing. Because of that I can find it and see how rare it is!! Nice pick up. And the book will help you with every question you have. I love blogs on these.. Conder tokens have gone up. One was at auction at Davidson's for 12,000. Great blog. Thanks for sharing this token!!. I enjoyed it. Mike