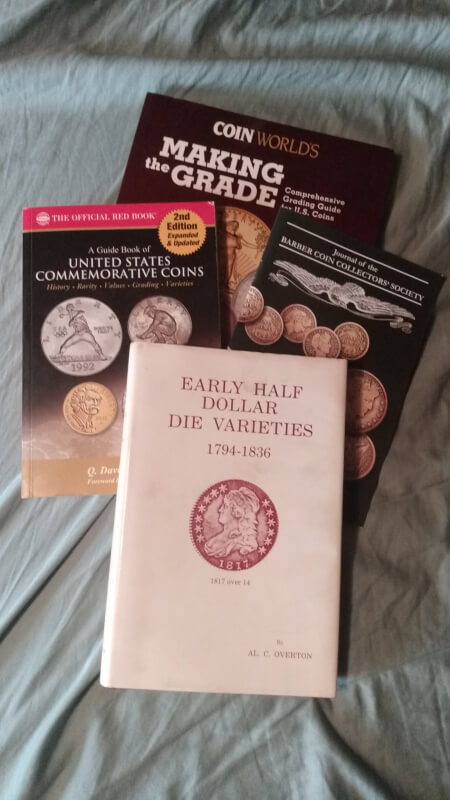 The subject of the week focuses on getting the most out of coin collecting.  Particularly the beginner, who more often than not collects coins at random which pique their interest for a variety of reasons. More than likely none of us seasoned collectors began with higher graded coin specific series or denominations, rather we pulled from loose change, roll hunted or were simply left a few coins by a relative.  As a result, this at times becomes overwhelming filling boards, albums or ring binders full of 2x2 flips containing no specific denomination or series, rather quite simply coins which appeal to us.  So making sense of things and bringing order to chaos is the weekly topic.                Enjoy!

As mentioned in the opening, the collecting of multiple series/denominations at the same time becomes not only confusing but distracting. One could easily, and at times quickly, lose interest since the collection isn't turning out as we'd hoped or fast enough to complete.  Before proceeding any further the number one rule to coin collecting must be address. Collect what you like. Not for what other's may like. As an example, and being personal, over my forty-four plus years I have assembled multiple sets of the same series. Each time I have taken a different approach in filling the album. Whether a circulated, toned, high grade or any other variation these sets are truly unique to myself and no one else. Some I receive compliments on, others the looks of "why in that condition?". And this is why we  collect.

Okay. So you have that cigar box your grandfather had left you full of coins. Multiple denominations over many years, some foreign from his time in the service overseas, but mostly Lincoln cents. There you set, hours later, with a new Whitman album one-third full of old circulated copper. Starring at the many holes yet to fill the mind races at the possibilities of where to begin tracking them down. The vast majority of the Memorial reverse series are still easily obtained the old-fashioned way, from loose change.  Others, like almost all Wheat backs and particularly the key dates, buying them is the only option.  As time goes by and the Lincoln album grows, the appeal changes slightly in that we now want better grades, bright shiny specimens. More importantly, we seek more information and knowledge of our new found treasure. This comes from a few sources. With modern technology that would seem to be unlimited and easily obtained. Just like the collection's beginnings, this also becomes a bit taxing as there are many forums, many publications, many web-sites and so forth that we question which is best suited for our collection. To ease things it's best to simplify. Whatever series you intend to collect, begin with something related specifically to your coin. For instance, books are the perfect route to take as they are physical, and while they could become lost, they won't crash like website or hard drive. As you will see in the image, I've include two (of many, many books in my personal library), one on commemoratives and another broken down to varieties within a specific series. The second book highly recommended would be one dealing with grading and having clear, color images of each denomination/series. Another source, in publication form, and likely unknown to most, comes from specialized coin clubs. Like that of the Barber Coin Collectors Society, also in the image, which covers the series in much greater detail than any other source. These would be my most valued source of all the books in my large collection.

To conclude, if armed with the proper tools you will quickly find yourself with a much better collection and one far more enjoyable. Values, or value guides, were held back until this point since as a collector we shouldn't do so expecting a huge payout in profit over time. For the average collector, that simply is not the case.  The percent yield between expense and profit is minimal comparative to stocks, bonds or bullion.  However, valuation guides are essential to not over paying when purchasing new additions. For graded coinage, both NGC and PCGS provide market values based on previous auction sales for free. As for uncertified, the ANA provides a rotating list in each volume of the Numismatist, as does Amos  Press  in their Coin World Coin Values. Both of these I've found to be extremely close sold prices found on EBAY. Which baffles the mind since the market changes rapidly between printings.  I hope that this helps you to assemble a stellar collection!

A good numismatic library not ony enhances your knowledge but also shows you new and interesting paths for further collecting endeavors, thanks for sharing your thoughts LB. .

Nice blog! Great points. Books are a must to help a collector navigate through all the coins...especially a beginner! ; )

A library is a must for collectors

Too true. For me I did OK unless I was at a coin show. Then there was just too many shiny things for me to stick to a list. Books are a must. I like to use ebay's SOLD feature for values. I recently bought a vary good digital inventory program. I needed to catch up to purchases so I went for this nice program. I'm still working on it but it is worth every penny. So much nicer than just making a list, which does work. Thanks for your hints.

All good points. I use books for some collections. And some are finished some are not. But I still look for the coins I need. Great blog as usual thanks for it!. Its enjoyable to read.

Thanks for the insight. As someone who has been collecting for only about two years, this is very accurate. As, I can sometimes be all over the place as it relates to filling holes. I think thatâ€™s why I havenâ€™t really delved into anything older than early-mid 20th century. Thanks for sharing LB.