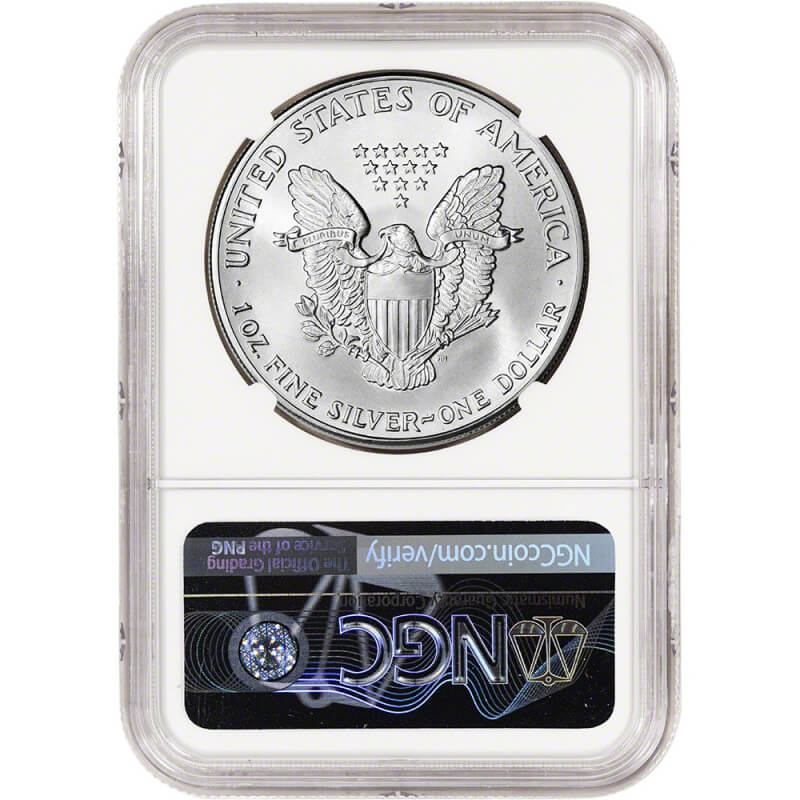 The title, PL 99-161, is both historic and important to collectors of United States coinage and the economy of the nation.  A law which ushered in a new age of collectors with the introduction of what would become one of the most highly collected coins in the world. The American Silver Eagle.  The subject of this week's blog.                     Enjoy!

One look and you'll know it is and where it's from. Even those who are not coin collectors. For those who do so, the design aspects aside,  what do we really know about the American Silver Eagle?   Surprisingly, the Silver Eagle is not in the title of the Bill introduced on January 3, 1985 for which it lies. HR-47, the Bills origin being in the House of Representatives, was entered by Representative Frank Dunnunzio (D, IL) as Statue of Liberty-Ellis Island Commemorative Coin Act. The commemorative appearing as Title I and the Silver Eagle as Title II of the law passed on July 9.  Being so, one may only speculate why this occurred. Were they also intended as a commemorative?  The law was, after all, referred to as the Liberty Coin Act a reference to the Statue of Liberty.  In researching this oddity, another forth coming law is most likely why they were not, if so intended originally.  The Gold Act of 1985.

As collectors we associate the American Silver Eagle to the American Gold Eagle and rightfully so as both fall under the same program despite their clearly different designs. To understand how these two coins become linked politics and economics play a large part. In the years prior to 1985, South Africa was promoting the private ownership of gold in the form of Kruggerands to bolster it's economy. Controlling 2/3 of the world market, by 1984 some 600 million worth of gold was sold in the U.S. alone. Canada had also been following suit introducing the gold Maple Leaf in 1979 which overtook the Kruggerand in 1986.  To think that the United States, which to this point only relied on pre-1933 90% gold in the market for private ownership, had not been concerned with a purer version increasing would be fool hearted.  It would be the actions of Apartheid by the white-run South African's which lead to the introduction of PL 99-185, the Gold Act of 1985, on September 9.  President Ronald Reagan had earlier banned the importation taking effect on October 11.  Having already signed the Liberty Coin Act,  the Gold Bullion Act of 1985 would be signed on December 17.   Where the Silver Eagle is concerned with the Gold Eagle under the law is in the wording of the text.  The PL 99-61 and  PL 99-185 are nearly identical with respects to the mining of metal. The Gold Act clearly states "the year of minting or issuance" whereas the Liberty Coin Act does not.

The single section of both laws which favors the Silver Eagle in insuring it's continuance may be found in "shall mint and issue...in quantities sufficient to meet public demand".  Released on November 24, 1986 and selling 5.3 million uncirculated bullion with another 1.5 million collector proofs, it was obvious that the American Silver Eagle was here to stay. What's interesting- and little known- the uncirculated coins were struck at San Francisco  yet bear no mint mark, something left exclusively for Philadelphia coinage.  These very words also explain the rarity and non-issue of certain years.  Where the metal comes from, also specified in the text, being another part.  None more important than the year  2008 where no proof versions were struck due to silver availability versus demand of the bullion (uncircurated).

Nice history about the start of the program. Good luck with your collection.

I was watching a coin show. They had found unopened monster boxes of the 1986 Eagle. Every coin graded a MS 69. . Another show the same thing. Not one 70.!!

I don't think there is one blog you wrote were I have not learned something. I did not know about that bill and the name of the coin. You're I will read again. Why I enjoy them.

Well written as usual my friend. Thatâ€™s a great looking coin and thanks for sharing buddy!

Well written. They are beautiful that's for sure! Regards Doug

Excellent blog as always! Thanks for the history and facts about this great coin.

Thanks! I'm aiming for a complete MS/PF 69 set. I mean, who carries a magnifying glass around? Much cheaper to boot.

Great blog. As a collector of these coins I have to say that I am overwhelmed by the new reverse, Type ll. There are just too many finishes now. I will be limiting my purchases. I do enjoy my "classic" type l'. Some are developing great toning. Thanks again.