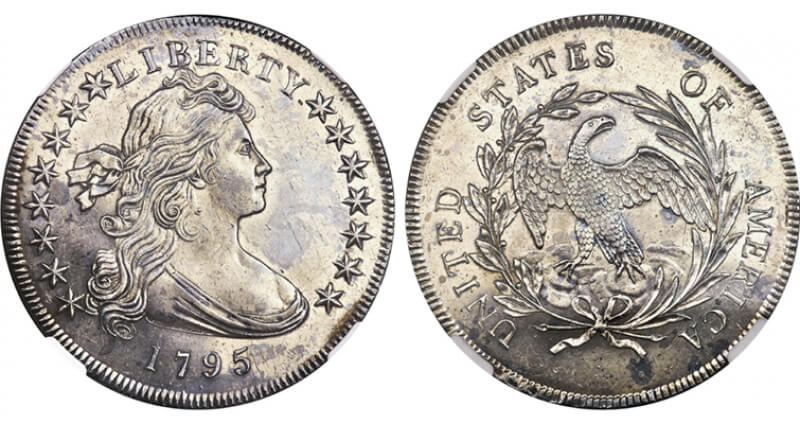 The title says it all as to why this the author's all-time favorite coin design.  That which contains the "King of Coins", a footnote subject to this week's blog, the Draped Bust silver dollars of 1795-1803.  Why the 1804 was omitted will be discussed with concrete evidence.  In any event,  Enjoy!

While the early dollar denominational coinage of the United States is beyond the reach of most collectors, selling for high four figures and above in grades of good/very good, the design is also available for the quarter and half dollar which are much more obtainable. To get an understanding of how the Draped Bust came to be, we must look at the political and financial aspects which lead to not only one of the most beautiful coin but the most important.  The Founding Father's, Robert Morris, Alexander Hamilton and Thomas Jefferson in particular, deemed in essential that the dollar be the cornerstone for the monetary system of The United States. With the Mint Act of 1792 defining the coinage, there were many unforeseen quandaries. One, with a new nation rapidly growing and prospering, the need for coinage was great to say the least. Particularly small change.  In the same year, only the half disme (dime) would be struck, presenting yet another. A shortage of precious metals to begin striking coinage. At the time, a dollar was the equivalent to a days wages where as small change was the backbone of the economy. Third, under the law, Congress pushed that both the mint's coiner and assayer must be bonded prior to striking as each handled the precious metal. Which was set at $10,000 per man payable to the Treasury. Again, a far cry above and beyond what few if any made in a full year. For this reason alone, no other silver coinage was struck until 1794. Only the copper half cent and cent.  It was Thomas Jefferson who stepped in and lowered the cost to a more reasonable $5,000 for Coiner Henry Voight and $1,000 for Assayer Albion Cox. The mint in Philadelphia was now ready to strike silver and gold coin.

By 1794, two years after passage of the Act of 1792, and under pressure from Congress since, Chief Engraver Robert Scot had already had the dies ready to begin striking dollar coins. The entire production of 1794 dollars occurred on October 15 with the minuscule total of half-dimes which followed later in the year.  Plagued with issues, from a press less than sufficient for the task to less than optimal composition (.892 silver per Congress rather than .900 recommended  by the assayer), the majority of these were handed over from Scot to Mint Director David Rittenhouse where they were placed in the mint's vault. A few were handed out as souvenirs and some entered commerce for the public to see. (Like today, it's all about image. That things are working even as they may not). While, as believed by researchers, the blanks and subpar strikes were used the following year.  Due to this, production of the dollar was halted until a new press arrived, which it had in the spring of 1795.  The new press proved more than sufficient, striking a whopping 160,000 by the fall.  The Flowing Hair design featured a personification of a young Liberty with her hair flowing as if by a gentle breeze on it's obverse.  An almost young appearing eagle encircled by laurel branches on the reverse.

As the Mint churned out coinage to satisfy a needful commerce, politics were still at the fore front as to how the mint operated.  The world was changing. Silver and gold coinage were making their way across the ocean to Europe as a means of economic trade. In the view of those politicians concerned with the perception of United States coinage, the silver dollar in particular, served far more than a monetary purpose. It was quickly deemed a symbol.  In Philadelphia, Mint Director Rittenhouse had resigned in late June, replaced by Henry William DeSaussure. The new Director set out immediately to redesign all U.S. coin designs, some speculate from political pressure.  For the dollar, portrait artist Gilbert Stuart, possibly under the suggestion of President George Washington,  prepared a drawing of Philadelphia socialite Anne Willing Bingham, supposedly the most attractive woman of her time. Liberty had grown from a young lady to a mature woman. With more naturally flowing hair tied with a bow, drapery exposing her cleavage flanked by 15 stars representative of the states in the Union.  The eagle of the reverse, likewise aged, now surrounded by palm and olive branches as a symbol of peace.  This design would remain relatively unchanged for three years, adding only one more star in 1797 with the admission of Tennessee as a state. Interestingly, in 1798 when it became clear that one star for every state would not be feasible, 13 for the original colonies were adopted. However, there are examples of 1798 which reverted back to 15 stars when a previous reverse die had been used.  The dollar would once more be redesigned that year.  For political purposes yet again.  England was at war with France. To this point the United States had remained somewhat neutral yet had to keep it's image abroad. Contrary to common belief, the Great Seal of the United States is not that of Benjamin Franklin. It was designed by Philadelphia lawyer and numismatist, William Barton and adopted by Congress in 1782 for such purposes. Used on official diplomatic documents and treaties since, Congress now felt that should be applied to the silver dollar as an equal representation to the nation it's self.  The new heraldic reverse was a modification of the original seal, with an unforeseen oversight. Robert Scot had created dies with arrows in the eagles right claw and and olive branches in the left. Where symbolism pertains, the right is a sign of being war ready the left peace. Meaning, to some, that the United States was looking for a fight. Perhaps picking sides between England or France.  Whether by accident or Scots personal views of his time, the reverse would go unchanged until the last dollar of 1803.

Which brings us to the "King of Coins", 1804. A coin which at best is a specimen, pattern or trial piece and not an actual coin for production as those of the same design.  Without going into the numerous facts as to why, they were not struck in the year 1804. The dollar as a denomination ceased being struck simply because it served no purpose for commerce other than transactions from bank to bank, nation to nation, ect.  The concrete evidence is in the press used. All early dollars were struck in a closed collar press, the lettering rolled into the edge on a castaing machine prior to being placed in the press, the collar holding it firmly as pressure imparted an image. This required dies slightly larger than the finished coin.  Coinage after 1833-36 with new presses were open collar, dies smaller than the finished coin, to allow for expansion of the planchet.  All known 1804's  have edge lettering applied (except the single Class II) AFTER the striking, as evident since none bear complete lettering most likely crushed against the collar through expansion. But, any further evidence would be for another blog. Personally, I think the title is aptly applied as only a king could afford one. I feel it's long overdue in removing it from the list of Draped Bust dollars as it is clearly not. The same with those supposed 1801, 1802 and 1803 proofs struck long after presses of 1803. And for the exact same diagnostics as the 1804.

Really indepth review. Love the details and like you stated "costly" to pursue. Being a YN maybe I have time to pursue?

Very interesting info. I seem to recall the stars were added by an Individual using dies and a hammer, hence some of the error coins that have the stars incorrecly located on each side of the obverse. i.e. eight on one side and five on the other instead of 7 and six. Does this ring true?? No pun intended. lol Regards Doug

I love the Bust design and hope they bring it back in some form for our 250th birthday. I have an 1803 (maybe I am lucky enough to have one of those 1803 Dollars produced in 1804?) Nah, probably not. THanks for a great blog.

Really great blog! Packed full of information! She's a beauty for sure! ; )

Very good blog. Very interesting. I totally agree that this is a coin that only a king can afford. Thanks.

What can one say. Thank you for an excellent blog..You mention that some were given out to just the people. The same happened to the Fugio but not in1787. In the 19490's that's right a Manhattan bank found a barrel I there vault and handed them out to there good customers. If they only knew. Rumor is about 800+ coins still exist in that barrel. You blog brings everything I to a growing nation which has to do commerce with other banks and countries. With all that went on so you they made it. The King of Coins. I can't possible comment on all. So again I will read it again with much interest. Thank you for your hard work and research and sharing it with us!