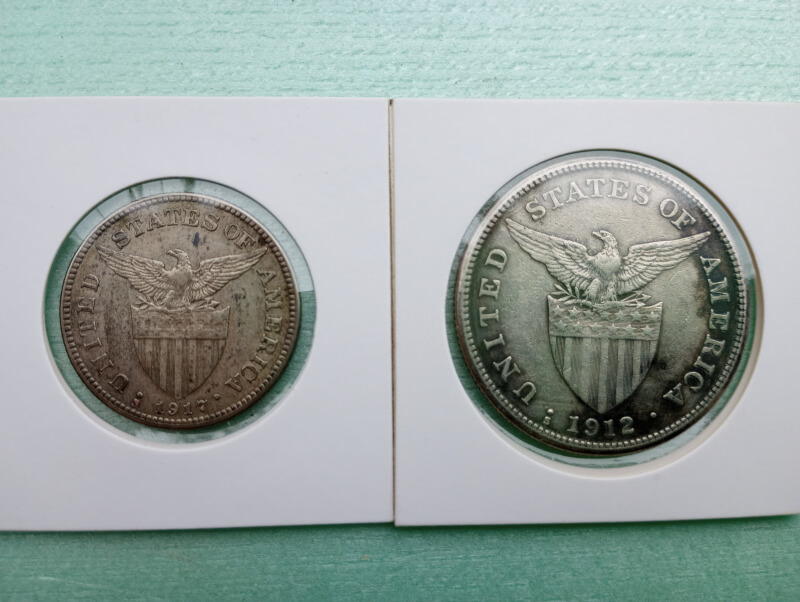 Should the phrase "unknown", or "forgotten" arise in conversation many collectors would most likely reply Dahlonega or Charlotte.  Perhaps even the long silent New Orleans or Carson City mints.  Yet there is one which escapes nearly every ones mind despite knowing and seeing coins struck from a mint of the United States.  Even your's truly as I began a new U.S. coin series with my current Irish coinage  slowing and fact that I've not bought much in the way of U.S. lately.  Intrigued yet? An unknown, forgotten and historical mint is the subject of this week's blog.                      Enjoy!

Following a loss to The United States in the Spanish-American War (April 21  to December 10, 1898), Spain ceded possession of Puerto Rico and the Philippine Islands in accordance to the Treaty of Paris.  Just two days later a conflict would erupt once more on the Philippine Islands. This time, not with the Spaniards, but with the Filipinos lead by Emilio Aguinaldo intent on self-rule rather than another colonial rule as was the case under Spain. Despite a promise by the United States of just that, independence, through nation building efforts and policies the fighting between nationalists and U.S. forces would continue for three years.  All the while policy makers and the general public debated the annexation of the Philippines. As 1902 arrived, President Theodore Roosevelt was becoming intent on resolving the matter lest nations such as Germany or Japan seek to control them.  The world was, after all, rapidly changing with several nations becoming militarized on a grand scale.  Europe and Asia particularly.  Sensing as much, he urgent Congress to proceed exceedingly to resolve the matter on the Philippines. Which they had, passing the Philippine Bill of 1902 by late spring for his signature on July 1.  The new law outlined in specific detail the structure and intent of the U.S. position that  eventual independence would be granted. The law also contained a lengthy section on coinage.

With Roosevelt's authorization  of new and distinct designs for the United States Territory of the Philippines coinage should be struck in Manila, if possible, or in a U.S. mint incurring a reasonable rate for the work being done.  Lacking the facilities and capacity to do so initially,  U.S. Mint Chief Engraver Charles Barber was tasked with designing and preparing dies for use at the Philadelphia Mint. Half, One, Five, Ten and Twenty Centavo and Peso dies were ready by 1903.  By 1908 San Francisco was granted exclusive production of all Philippine coinage.  Finally, on February 8, 1818 the government of the Philippines was ready to mint their own coin, having 100,000 peso appropriated for construction of machinery.  U.S. Mint Chief Engineer Clifford Hewett supervised the designing of the machinery at Philadelphia.  Tested and satisfactory, the equipment was shipped via the Panama Canal in June 1919.  By November the machinery had arrived in Manila and Hewitt at month's end to oversee it's installation  and testing upon completion.  The Manila Mint, on the lower floor of the old Interdencia Building, which also housed the Senate and Department of Treasury, was officially opened on July 15th 1920.  A copper ingot was taken from the furnace, cooled before being rolled into a sheet, then stamped into small metal discs and placed into the press. Under the direction of Hewitt, Governor-General Harrison struck the first coin on Philippine soil, a One Centavo.  In honor of the commemoration witnessed by several attending representatives and dignitaries, Hewitt struck a mere 5-10 gold Pesos having an obverse bust of Woodrow Wilson dated 1920 and a reverse depicting Liberty instructing a youth on the art of coining.  2,200 bronze and 3,700 silver of the same denomination/design were struck likewise.  These so-called Wilson Dollars are prized by specialized collectors with prices reflecting as much. All coins struck bear no mint mark just as those from Philadelphia between 1903 and 1908, the latter year being a proof only strike. No coins were struck in 1922 through 1924, resuming in 1925 bearing an M mint mark, and again ceasing in 1935 with the final year being 1938.  With Germany now at war with most of Europe to the west and Japan invading mainland Asia, the threat loomed heavily on the Philippine Islands that by 1941 all stores of precious metals and excess coin were relocated to the island of Corregidor in Manila Bay.  Fearful that they would fall into the hands of the Japanese as they now invaded the Islands, tons of ingots and coins were tossed to the depths of the bay.  This would explain the common sea salvage designation commonly found in the market place today.  Despite enemy military occupation, and with  U.S. forces arriving,  coinage again resumed in 1944 albeit struck in San Francisco or Denver.  Calculative and steady the United States had pushed back the Japanese across the many Pacific islands they once captured. Fighting to the last man, as they'd done thus far, the Philippines were proving to be the most challenging as it had much larger cities and civilian population. Manila in particular, was full of seemingly impregnable strongholds and structures including the Interdencia Building.  To breach and eliminate the Japanese strong point of the government building, General Douglas MacArthur brought up the biggest guns in the U.S. arsenal.  On the morning of February 23, 1945, 240mm (9.4 inch) "Black Dragon" howitzers of Company C, 544 Field Artillery lobbed an estimated 140 of the 360 pound projectiles upon the building and surrounding city center. The Manila Mint was in flames. Liberation of Manila would not arrive until March 3, the entire island chain by September.

If there was a bright side, having begun the transition from territory to self-rule in 1935 and establishing a Constitution, independence was finally granted on July 4, 1946.  Just sixteen months after the Battle of Manila. Philippine coinage, however, would not resume until 1958. Again by outside facilities such as the U.S. Mint, the Royal Mint of London and VDM Metals of Germany. Even the Franklin Mint struck business coinage for the Philippines! The monetary title was also changed from centavo to sentimo, while the peso returned- something not struck since 1912. BSP would be striking coinage in Manila proper in 1980 with talks of an actual national mint currently ongoing.

The photographic images are courtesy of NGC Collectors Society. The 50 Centavo, a 1917s and the  1912s peso are both key date coins I recently acquired in AU condition. These cost me, but I won't disclose how much, only that with this series I'm knocking out the tough dates first.

post script: that brown spot on Liberty's breast of the Peso is a flake of tobacco.  A, I need to quit smoking, B I need to check my images before saving and submitting!

I have two coins from the manila mint when it was a us territory.

Now that is a history lesson. Needs to be in the Redbook.

Thanks for a great blog. Loved your narrative. It takes us to places. Great currency items.

Choose B. Life is short.

Beautiful coins! Even with that piece of tobacco... haha! I really like that design! Thanks for a very informative blog. Enjoyed it! ; )

Thanks for another very interesting and informative blog. I have several of these and always liked their design!

Valuable information, a great history lesson, and very nice coins. Not many people these days know of the connection between the Philippines and the U. S. To the point of the U. S. produced coins for the Philippines, and assisted with and oversaw the establishment of a mint in Manila. Thanks for sharing this piece of numismatic history Long Beard.

Another great blog. I did know about this mint but learned more from you. Thanks for the info and pictures. P.S. I have seen Mikes DD coins. They are awesome!

There was another mint minting business strikes for us for years and no one knew. West Point.. Before they became a US mint they made coins for us. They never put there mint mark on the coins. Your blog I have to put my readers on. And I'm glad I did. Its you monthly great blog. I have two rolls of Ten Centavos made of silver struck at the Denver mint.I ordered them and they were from 1945. One complete roll had the famous Allen b DD. Every letter date and mint mark I sent that roll to NGC and received MS 67. I won't tell you the price but they sell at auction for a large sum. There is said to be 20 still around . I have most of them. Great blog I love there coins and your history has taught us again. I will read it again. Because I enjoyed it

You should come to the Western Pennsylvania Numismatic Society in Febrruary, Isabelo Toledo will be doing a presentation on Philippine coinage from his personal collection. I bet you would enjoy it and you two could chat after. LMK if you're interested. We meet at the Methodist Church on West Liberty Avenue the first Tuesday of every month. Thanks for sharing, it was all very very interesting.

Thanks for the invite! Happy to if I remember, I did not even know it existed so thanks, pal.

History, thatâ€™s really what itâ€™s all about! You have two very nice pieces of history there Long Beard! Thanks for the great blog & history lesson!

Like the sea-salvage, which I'll likely avoid, the dark toning on the peso adds a bit of mystery. It's black, as if in a fire. Peso's weren't widely used, which is why they ended in 1912, so perhaps it occurred from the conflict of the 40's? I acetoned it, like most of my coins, to remove any finger prints and junk before going into adhesive 2*2's.