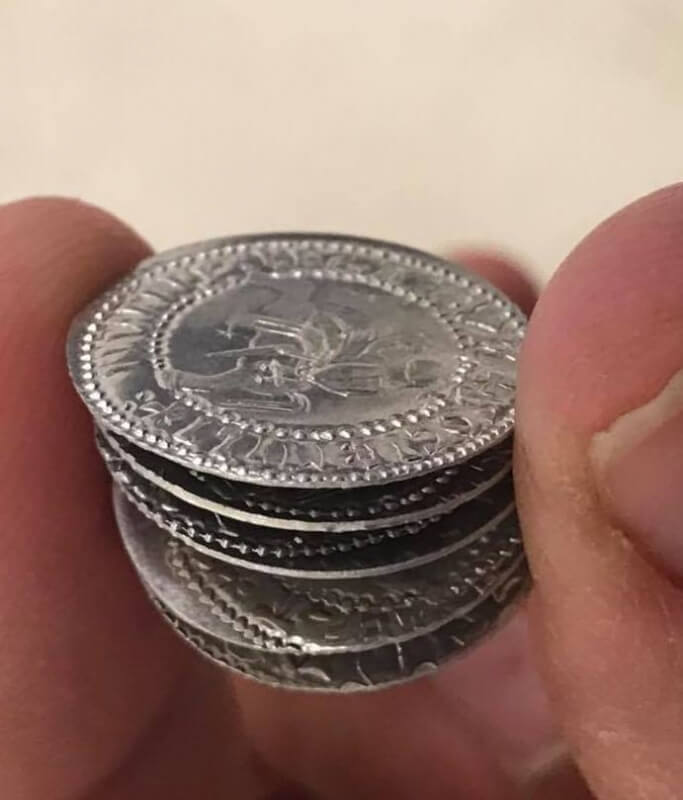 03 Jan 2019
Our young numismatists' club, the Legacy Knights Numismatic Society, has finally produced its first coin (pictured)!
But is it really a coin?
According to the Merriam-Webster Online Dictionary entry for the noun, "coin" (https://www.merriam-webster.com/dictionary/coin):

a)   a usually flat piece of metal issued by governmental authority as money.

Our Society's coin is minted on a flat piece of metal, in four metal varieties (aluminum, copper, sterling, and fine silver) for a total mintage just over 600.  Our members took part in striking the aluminum version.  It was commissioned by our Coordinator on behalf of the Society, and issued first to its members by the Coordinator.  I guess you could say that, since those who oversee and direct the activities of our own club were involved, that our own private "governmental authority" was involved in issuing them; but not a "governmental authority" that as such would have lawful regulatory, administrative, taxation, or policing powers over a public jurisdiction.  And although it was patterned after a medieval penny, it was not made with the intention of using it as a medium of exchange or currency, as money is.  By this definition, what we made is not a true coin.

c)   something resembling a coin especially in shape

Our Society's coin was most certainly made to resemble a coin, not only in shape, but in material and design!  By this definition, we have made a coin!  But this is sort of what one would call a colloquial definition; because people naturally call things the same name as a more familiar object if they share enough similar characteristics, especially in appearance.  This makes this probably the weakest definition of a coin... but if the appearance is all that matters, that's enough.

d)  a unit of cryptocurrency

So there it is:  our coin is only a coin by the weakest definition; by the more technical definition, something created to be issued and used as money, it is not a coin.

Well then, is it a token?

Back to Merriam-Webster Online (https://www.merriam-webster.com/dictionary/token), under the first entry for a noun:

What we made does resemble a coin, but no terms of use were really defined at the time of issue.  Some tokens are "good for" a bus fare, one play of an arcade game, a beverage, etc.  Those spend like money, but are restricted to certain predefined uses.  We didn't have that in mind when we made ours.

What we made does resemble a coin, and we are not a "de jure" government; but again, it was not defined as money when we issued it.

c)  a unit of a cryptocurrency

Here we go again with the cryptocurrency.  We made a tangible object, so a definition for a technical concept does not apply.

Let's jump to the fourth entry for the noun "token":

Yes!  That's exactly what this is:  something that commemorates our Society.  Members and non-members alike might see it that way.

b)  a small part representing the whole; indication (as in, "This is only a token of what we hope to accomplish" or "this is just a token of the wealth that awaits you")

Well... it has a knight and a cross on it, and our name and motto on it in medieval Latin; all of which represents our members, our school origins, and our values.  That definition could apply to intangibles such as actions representing larger goals; or tangible samples of a greater production or accumulation; but crossing the tangible-intangible comparisons weakens it.  I would see our coin as a tangible symbol representing our Society and its intangible values.  I guess this would apply in a way.

c)  something given or shown as a guarantee (as of authority, right, or identity)

Yes!  It was originally intended that a person could show this coin to identify as a member, sponsor, contributor, or supporter of our Society.  There are no rights or authority per se that accompanies the transfer of this object; but it would show an identification of sorts, perhaps an affiliation with, or just an affection for, our club.  That is, unless someone traded or sold theirs to someone else.  At that point, it's just a collectible piece.

So technically, our Society coin is really a token.

Or is it a medal?

Absolutely!  It was intentionally designed to resemble a medieval coin.  The design was stamped (hammered, to be specific) into it with dies, and it commemorates the existence of a group of like-minded persons who joined to form our Numismatic Society.  In my humble opinion, we've achieved some excellence already, so, yes! we are commemorating our excellence as a group!

So which is it, really?

From a numismatic perspective, I know I can eliminate "coin".  NGC would not grade it as one, because it was not issued by either a de jure or de facto government to be used as a means of currency within its jurisdiction.

But what would they call it:  a token?  or a medal?

The Token and Medal Society (http://www.tokenandmedal.org/FAQ/FAQ.html) says this:
"Strictly defined, a token is any substitute for the money issued by governments. The most common form of token is a metal disc, similar to a coin, on which is inscribed the value and the issuer. In theory, tokens were redeemable only by the issuer, but some were accepted widely and often circulated just as coins. In practice, many other items, such as advertising pieces, are also called tokens as opposed to medals."

Again, ours was not issued with the intention of substituting it for governmentally-issued currency (although a kindergartener found one on the school cafeteria floor and tried to "put it on account"!  The lunch lady did NOT accept it, or we would have officially had a token exchange).  We also do not have a face value inscribed on them.

There's a new book out (https://www.coinbooks.org/v21/esylum_v21n10a04.html) covering the "tokens and medals" of the Chicago Coin Club.  Over the years, their club has produced tokens and medals representing their club, much as we just did (although I don't know if any of theirs were hammered).  Maybe I should read it to see if they actually distinguish between the two, and see if ours fits more in one category than the other.

What would YOU call it?

It's kind of a token and a medal.

Very nice medal. I enjoyed your blog on this. Very helpful and educational..... Blessings!

I think it would be considered a Medal. Its really cool too! Thank you for a fun blog!

I also say medal. It's whatever you say it is. You and your club are the governing entity.

Congress determines if it's a coin no one else. They have committee's and vote if it is or not. From that vote it takes two years. No author. grader or any one else determines if it's to be legal tender the coins we use for our economy. To buy and survive. We owe 23 trillion in debt. But no one cares about that. My good friend was wounded in Vietnam gets no money because of the shut down. You have a beautiful medal and watching the process was terrific. You should do it over and make a video and put it on you tube. A lot of people will learn from it. Mike

Most coins have been issued by a governing body and most tokens were privately issued. However, the U.S. government actually issued one token to my knowledge: The 1935 Alaska Rural Rehabilitation Corporation tokens. Denomations ranged from one cent to ten dollars and only a few thousand were struck.

Based on your extensive research and understanding, in my own mind , a coin is issued by a government entity to facilitate commerce, a token is issued by a commercial entity to also facilitate commerce, and a medal is something that has no commercial value but has a commemorative or similar purpose. I would deem the efforts of your club as a Medal, commemorating the art of making medieval coins. Very well done and very educational for all concerned, including the members of this blog community.

That concept ("to facilitate commerce or not; and if so, by whom") is probably the best, most concise Occam's Razor for determining the differences among the three. Thank you very much for that!

I think it's a medal! And a nice one too. Coins are what you spend.

I say a medal . It has to be legal tender to be a coin. The graders determine weather it's a medal of token. I would pick one of those. That your safe with. I know we buy a lot of books on coins medals and tokens. But I don't think the dictionary as one of the books recommended. When we made ours for our organization it was a medal. Yours seems to fall into that category. It's a good one. And it's great. That's why I say a medal. It has it all. Either way something nice as that you can't lose. You guys did a great job. And thanks for taking us on the ride with you. Mike