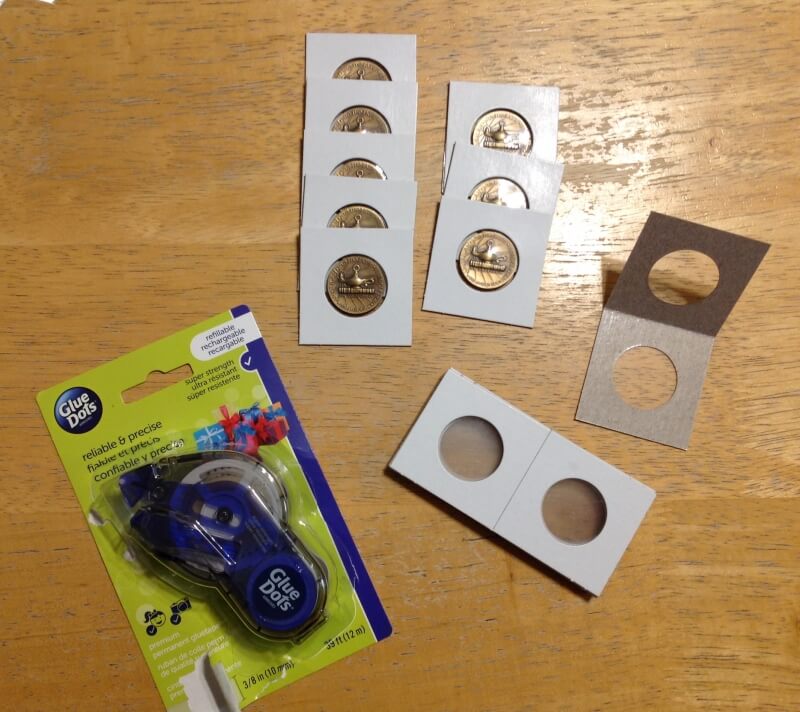 09 Jun 2018
I love neat, well organized displays.  I also love saving money.
And I hate staples.
Well, I mean to say I hate staples in 2x2 coin holders.  They spoil the look, and they get in the way of what I want to write on the 2x2.  There are other potential problems with using staples when storing coins.  Most issues can be remedied, but you're still stuck looking at-- and writing around-- staples.
Lighthouse Publications makes a great self adhesive 2x2, eliminating the need for staples.  However, whereas a traditional 2x2 can be had for around 4 cents all day long, I'm finding the self-adhesive type would cost me between 14 and 28 cents each, depending on how many I buy.  I've seen them, and they look great.  I'd love to use them, but raising my cost to store my nice-but-not-top-dollar coins by 250 to 600% is hard to swallow.  I'd save those for special occasions.
I've found a solution that works for me.  Walmart sells a dispenser of 3/8" glue tape for around $4 plus tax.  It's acid-free and made for scrapbooking photos and documents that would degrade if the adhesive had bad chemicals in it, so I feel pretty good about using it to seal a 2x2.  I haven't been using it long enough to tell any differently, but I'm not sealing any multi-thousand dollar rarities in cardboard 2x2's anyway, so I'm not risking much.  3/8" wide will work with 2x2 sizes up to the small US dollar size... a US half dollar size might be tricky or tight.  39 feet is 468 inches of glue tape.  That's enough to seal 117 2x2's using two 2" stripes of glue tape on each, for about 3.5 cents over the cost of the 2x2.  It's hardly any more work than using the Lighthouse ones, and it's anywhere from one-half to one-quarter the price.
Steps:
1.  Pre-fold the 2x2 and make sure there's no dust on the inner surface.
2.  Place the 2x2 on a work surface, then run a stripe of glue tape both above and below only one of the 2x2 windows.
3.  Carefully place the coin on one of the windows and align it, being careful not to touch the glue tape.
4.  Carefully fold the other side down onto the coin and press the glued area closest to the fold together first, then the glued area closest to the open end.  Now you can pick it up and pinch the glued areas together to ensure a good hold.  You're done!
[UPDATE:  The first time I did this with some elongated cent holders I bought online.  They held together great, no problems.  For these ANA medallions, I bought US small dollar size holders from the local coin shop.  No idea of the brand name of either.  The ANA medallions are thicker than a regular coin.  Perhaps that put extra pressure on the glue, because they popped open overnight while sitting on the table.  If you have thicker coins or medallions, try putting them in a 20-pocket page right after gluing them down so that pressure holds them together until the glue tape sets.]

This idea is ver inventive. I don't like looking at staples either, but sometimes I just want to hold the coin I got in my hand.

Looks good. Sounds good. Let us know how it works out for you please. Staples look terrible..

I agree, I hate the look of staples too. These adhesive 2X2's look pretty cool! I'll have to try them out.

Just make sure that you get a couple good stripes of glue down, press them really well, and if the coin is thicker than a normal US cent, consider putting them in a pocket page for at least a couple of days to let the glue "set". If you do this let me know how it turns out. This method worked perfectly for my elongated cent collection.

Good idea. I may have to try that.

Interesting. Just the other day I was putting some coins in 2x2's. It seems 2x2's are for temporary storage (pending eventual slabbing) or for lower grade or lower value coins which are just not worth the cost of slabbing. And yeah, I hate staples too.

Your right uniformity also makes a nice presentation. I hate staples to they also have an affect on the coin! These due a great job. Thanks foe the information. Mike.

Being careful is the key to your process. Thanks for the information.