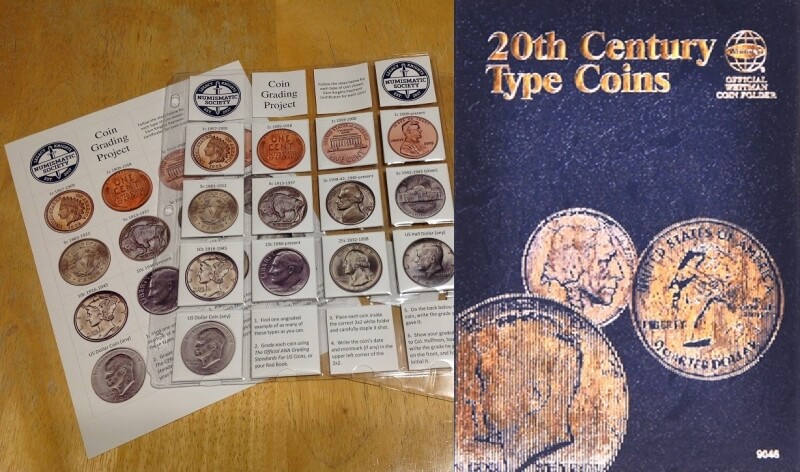 10 Jul 2018
Being geared towards new, young collectors, our school club tries to emphasize the basics of numismatics... things like how to handle, store, and protect your collections; how to identify what you have; and how to grade items for condition (and hence value).  Accordingly, one of our activities is the Coin Grading Project.

Even more essential to a basic knowledge of numismatics, however, is simple exposure to the breadth of items covered by the term "numismatics".  I remember when I was a kid being fascinated by coin and banknote designs that I had never seen before.  Franklin half dollars hadn't been superseded by Kennedy halves for very long when I was born, but by the time I was old enough to notice the design of coins in my change, Franklin halves were long gone from circulation.  The first time I saw one, I thought it was amazing... and then I saw a Walking Liberty half.  Prior to that, I thought the Bicentennial series was really interesting both for the historical topic and just for being different from the norm, from their dual-date obverse to their themed reverse.  I really like both the Franklins and the Walking LIberty halves to this day, and the Bicentennials, although pretty common, always make me a little sentimental.  Yet, how many more designs in various denominations would have gone unnoticed, if I hadn't been given the opportunity to sort pennies from my dad's change jar or hadn't been given some Ike dollars by by brother, gotten bitten by the collecting bug, and bought a US coin price guide.  The 20th century saw some beautiful designs on US coins, and most of which are still fairly affordable to the young collector to this day.

So this year, we've decided to expand our Grading Project in such a way that will give the students more exposure to more US 20th century coins.  Last year, our students could earn an LKNS medal if they would grade 13 different, specified US coins and review their grade determinations with a local expert.  Starting this year, if they complete the first 13, they can earn a second award if they grade another series of US coins, different from the first.  They can earn a third award if they grade a third series comprised of still different coins.  Among the three series, a basic 20th century US type set can then be assembled, with a few additional coins beginning the expansion into the 21st century.  If they complete all three grading projects, they will earn an additional recognition for completing the type set.

Because some 20th century coins are more difficult (or more expensive) to obtain by a young student, we start our first grading set with some of the more common or less expensive ones; most could be gotten from change, with only a few possibly requiring a trip to the coin shop.  The second and third grading sets gradually get harder to find, or more expensive to buy, likely requiring a trip to the coin shop.  This is by design, to encourage the collector through initial success.

Repetition is key to gaining grading expertise, so we simultaneously reward the students for every coin they take through the grading process, including duplicate types.  If a student only wanted to grade wheat cents, for example, they wouldn't complete their grading project, but they could still earn the same amount of money for the annual auction.

In the end, our club's goal is to have members who  not only are familiar with US coins from the 20th century, but who also have some knowledge and experience in grading them, as well as have an interesting collection to show for their efforts.

Grading is an undertaking for anyone. To get the kids started and interesting in grading is wonderful! Thank you for all you do!

A great skill to have starting out in the hobby, and advancing in it. It takes a lot of experience and repetition to grade, and it is not a perfect science.

Good, well thought out. Good to learn grading at a young age.

That sounds like a great plan. Thanks for working with kids. Get them hooked on our great hobby... Thanks for the blog!

I enjoyed t he blog very much your idea's are great and it does teach the slandered bearers of our hobby. Grading is very hard. We don't have the tools and equipment that NGC and PCGS has . Nor the camera's and computers. We all could argue what this grade is and that grade. It has taken me twenty years of reading and studying grading. My percentage is almost 93 percent right. They call me when my coins are leaving and I tell them the grade. But that took hard work I didn't learn from picture although they helped. The difference between a 64 and a 65 could mean thousands proof like deep cameo it does get complicated. But you have them on the right path good for you. Maybe they will be future graders lots of luck with it. Mike

Hi Mike, yep, it does take a long time. I never practiced it... when I was a kid it was more about what I "hoped" it would be based on the price guide than what it really was, haha! As a kid I didn't realize that "proof" wasn't a grade; I guess I thought it was something better than "uncirculated". If nothing else if these students learn that difference, and learn that condition affects value, and know what all those acronyms in the price guide mean, we've accomplished something. But I want them to understand the process of grading also, so that if they stick with collecting, they will have an understanding of a fair value for what they have and what they want.