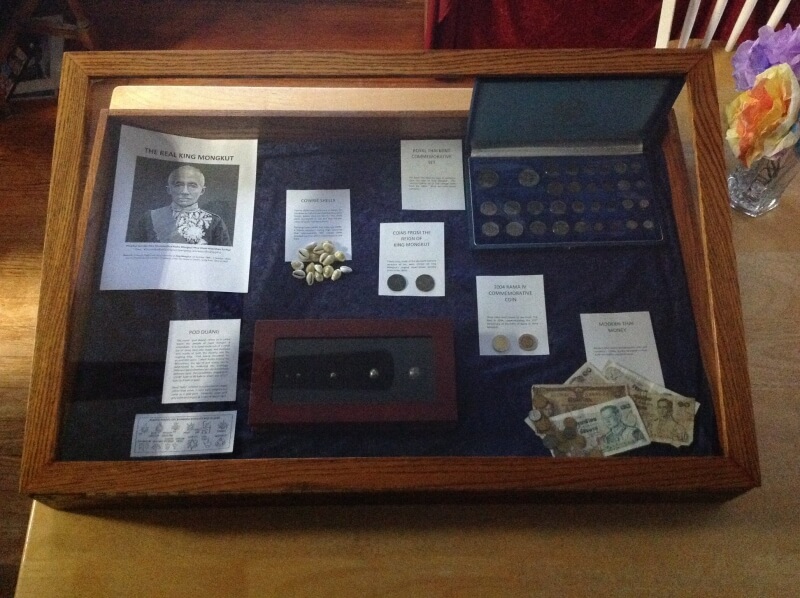 19 Apr 2018
National Coin Week just so happens to coincide with our club's school's annual musical.  This year the musical is "The King and I".  Legacy Christian Academy in Xenia, Ohio, really does have a phenomenal drama department for a small Christian school.  They are located on the old campus of the Ohio Soldiers and Sailors Orphanage, established over 100 years ago to care for the orphans and dependents of Ohio's Civil War veterans.  it then became the Ohio Veterans Childrens Home, serving the same purpose for the children all Ohio's military veterans of any conflict.  The campus had dormitories, a working farm, its own power station, a gym, a chapel, school buildings, and a full-blown theater.  The school buildings, gym, and theater now comprise Legacy Christian Academy.  The theater's amenities allow for some great productions.  It's 80 years old, but they have the rigging to haul backdrops, scenery, and props up and down, perform special effects like snow and flying scenes, etc.  So this is no slouch of a school theater, and the work the director and students put into the productions each year are worthy of such a facility.  Learn more at http://www.legacyknights.org/fine-arts/playsmusicals.cfm.

During each musical, the Art Department hosts a student art show in the chambers below the auditorium.  The patrons come downstairs to see the art and buy refreshments during intermission.  This year they shall be treated to a display by the Legacy Knights Numismatic Society.  We decided to put together a display box featuring numismatic items from Siam during the era depicted in the musical.  It's a fascinating history:  Mongkut was king of Siam in an era of Western colonialism.  He was friendly with the West but he did not wish his nation to be colonized by them.  Siam was rich in natural resources which the world powers wanted.  Mongkut decided to embark upon a series of national modernizations that put Siam on equal footing with the rest of the world, instead of being seen as barbarians... yet he walked a fine line between modernization and tradition, culture, and heritage.  Mongkut relaxed trade restrictions with the outside world.  This change deeply cut into his government's revenues from tariffs and taxation; but the loss was more than recovered as his nation's private wealth grew.  The Siamese economy grew so fast, that they soon experienced a shortage of hard currency.  They had been using pod duang, "worm money" named so because the Siamese thought it resembled a curled up worm.  To the Western world, these silver pieces resembled musket balls, so Westerners nicknamed it "bullet money", a name which has stuck to this day.  Pod duang was tediously made by hand, and could not be made fast enough to keep up with demand anymore.  So King Mongkut ordered a steam-driven minting machine to make coins.  However, these were made to order and took a long time to make.  He received a hand-cranked minting press as a gift from Queen Victoria to get started making coins while waiting for his steam-driven press.  It too was too slow to meet demand, but at least they were started.  Once the steam-driven press arrived, they finally were able to meet demand...  And that was the beginning of the modern-day Royal Thai Mint.

I find it particularly interesting that, once the taxes on trade were removed and the people were allowed to conduct their own business, that the economy grew so fast that more money had to be made to accomodate all the subsequent commerce... perhaps a lesson for modern nations.  In some cases, good government helps best by getting out of the way.  In Mongkut's case, his modernizations and free trade ended up saving his country from colonization by the West.  In fact, Siam was the only country in South East Asia that wasn't colonized; they maintained both their independence and much of their cultural identity.  This is probably a better impression of the King of Siam than you would get solely from watching the musical.

Pictured is my first attempt at a numismatic display case.  I had the case handmade years ago for another purpose, but wasn't using it right now, so I picked that for LKNS's first display.  This display was entirely my work as the club coordinator this time; I really hadn't had time to explain to the kids how numismatists like to put together educational displays to display at coin shows and conventions.  But I'm hoping this first example will interest them, and help them understand that with a little interest, thought, research, planning, and creativity, a nice display is not that hard; and that numismatics really can be a part of other activities that you might not think it could be... things like musicals.

I would encourage you to look for ways in your local school to create numismatic interest by tying numismatics in with another activity of the school.  Perhaps your school mascot is an animal that you might find featured on different world coins, or maybe your school is named after an historic figure that you would find on coins.  (I'm talking to YOU, Lincoln Middle School!  haha.)  With a little thought and creativity you can find many ways to tie in numismatics to your school or with other activities... and a display will draw people in to check it out.

Don't forget to check us out at www.facebook.com/KnightsNumismatics ... Please like our page and pass it along to anyone else who might be interested in seeing how we conduct a school-based youth numismatic club.

Really well done! Great blog and display! Thanks for sharing with us.

Great blog. Very interesting history lesson too. Great job on the photo. Thanks!

Heh, thanks for the comments all. I hope I didn't wander into politics with the comment about governments taxing. All governments require some taxes to operate. Unfortunately, whatever you tax you get less of, and sales tax, depending on their severity, are a hindrance to sales. A few cents on a dollar likely won't hurt sales much, but high tariffs really do impact trade. Siam kept its people isolated with high tariffs on doing business with the outside world... in fact you couldn't do international business unless it was done through the government monopoly on international trade. That was a choice King Mongkut had to make: save their national independence but lose tax money and some traditional ways, or keep things the same and eventually lose all the above anyway when they got colonized. He chose to modernize and open free trade, and it saved Siam from colonization, and created wealth at the same time. Tariffs do more than raise money for the government, they have other effects. It's an art to know when to apply them and when not to for the best of your country. The results were good for Siam, that's why I think Mongkut was a pretty smart king! Here in Ohio we finally got the tax removed on bullion sales again, which has been good for coin dealers.

Nice display. Well done. Thanks for yr enthusiasm for a great hobby. Exhibiting is fun & you can learn a lot.

It does sound great. Exhibiting can be very rewarding.

It sounds wonderful. A play an a exhibit. That's what we call spreading the word. What a great way to do it. I think you did a great job on the display case don't worry. As far as trade goes our Governor wants to put taxes on all internet sales in N.Y. that will hurt alot. Someone like myself who can't get out I don't need this nor does anyone else why the internet with all the things they can tax they have to pick coins. Well I don't want to go on but again a great blog it has everything to look for kids display a great night. I would have to say you club is in great hands and with clubs like yours this hobby will go on for many many years to come. Enjoy. Thanks for your work and information it is well appreciated. Mike.