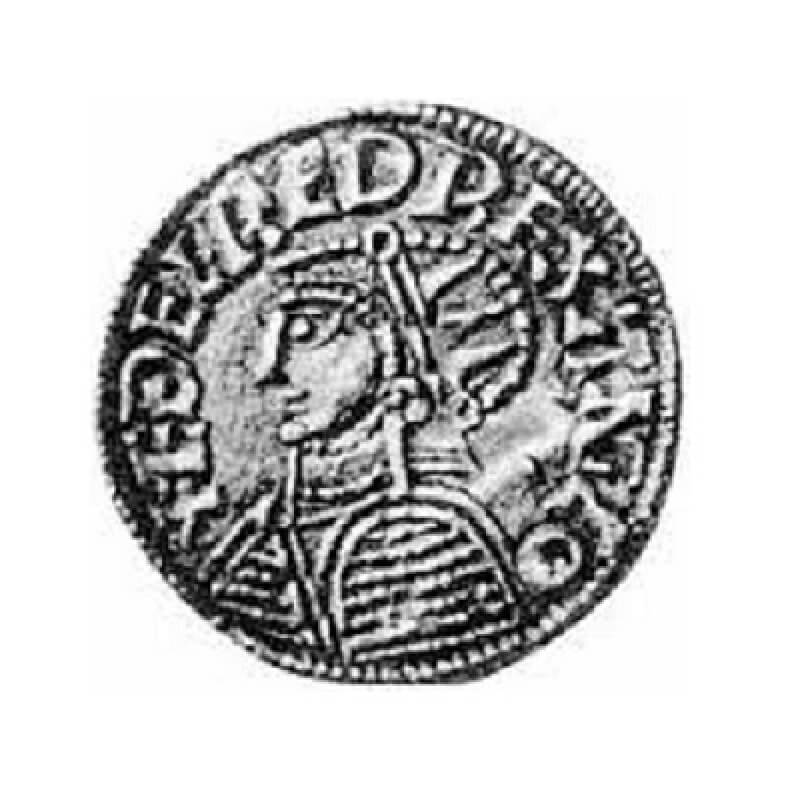 Background:  Ever since the beginning of the Legacy Knights Numismatic Society, as its coordinator, one of my dreams was to create our own coin.

Our club is an official extracurricular activity of our local Christian school.  Our school mascot is the Knight, and we are the Numismatic Knights; so a coin in a historic style of the Age of Knights with inscriptions and symbolism representing our club and school values would be ideal.

Before we can have coins made, we need a design; but before we have a design, it's best to understand the process of how coins are made, particularly how they were made in the Medieval era.

The Basics of Minting

The minting process is an interesting study.  It's well-documented on the ANA's website and elsewhere, so I don't need to explain it in detail.  I recommend that anyone interested in coins should study the process, and visit an actual mint when you get the chance.  A quick summary is all we need here.

Minting is the process of pressing a design into a bit of metal using a die.  You can mint coins, medals, or tokens.  In order to do this, the metal must be prepared; a die set must be cut and hardened; and a certain amount of pressure must be used to press the image of the die set onto the metal.  A shop that produces coins, medals, or tokens in this way is called a mint.

When a metal coin blank is placed between an obverse die and reverse die and struck, the pressure from the force exerted on the die set squeezes the metal of the blank into the recessed areas on the dies.  When the dies are removed, the metal that was forced into the die recesses now forms a raised image on the blank, which is now a coin, medal, or token.  The more metal you have to move and the farther you have to move it, the more pressure must be generated.  How much pressure is governed by the laws of physics (yep, science).  Big coins with high relief (a design that really stands out tall from its background) require a lot of pressure; small coins with low relief, not so much pressure.  This is true no matter what minting technology is used.

From the earliest coins until the end of the Medieval Era, coins were made one at a time by placing a blank between two dies and hitting the top die with a big hammer.

Blanks were made by heating selected metals (e.g. silver or copper) in a furnace until they melted into liquid form.  Often two metals were blended together to form an alloy (e.g. 92.5% silver, 7.5% copper, "sterling silver") because the alloy made a better coin (sterling silver didn't wear down as fast as pure silver).  This metal would be poured into bar shapes called ingots and cooled.  Then it would be flattened into thinner bars or sheets to the desired thickness of the coins.  Round blanks would be cut by hand from these sheets using shears.  During this process the bars of metal would be annealed, or heated and cooled, to make the metal more pliable; otherwise the bars would be hard to flatten and cut, and the blanks might split or shatter instead of take an imprint.  The blanks would be cleaned of any fire scale and oxide accumulated during the process.

Dies were made from iron or steel.  An engraver would use hardened tools to "relieve" or remove metal from the dies in a mirror-image of the desired design.  When he could, instead of relieving he would use hardened punches to punch letters and designs into the die, simplifying the process.  An obverse die and reverse die were made.  These would be hardened prior to use.

A human swinging a big hammer can generate enough force to mint a coin.  But there are limitations.  A good moneyer (a person responsible for the production of coins) can generate several tons of pressure with a single blow... but not hundreds.  Remember that moving a lot of metal requires a lot of pressure.  Therefore, in order to get a good strike (where the image turns out deep and clear), a human swinging a hammer can only create a coin of a certain size for a given type of metal.  Hammering coins works best on a) softer metals, b) smaller sizes, and c) designs that don't require much metal to be moved very far.  To get around those limitations, a moneyer would have a few options, such as striking a hot coin (heating the blank in a furnace), or hitting the same coin multiple times... but both are very inefficient if you intend to mint a bunch of coins.  (And as a medieval moneyer, you probably have one of the king's men breathing down your neck to meet the schedule!)  If the moneyer got in a hurry and rushed the job, coins would start looking off-center or not very clearly struck.

How Technology Limitations and Physics Affect A Medieval Design

Due to the difficulty in moving a lot of metal into the recesses on the dies when striking by hand using a hammer, simpler designs were favored over complex ones.  If a moneyer could make an image using simple line art instead of needing to carve a deep relief for a three-dimensional object, he was more likely to get a good, clearly-formed image.

Take a look at the silver coin of Æthelred II.  Æthelred is portrayed using a simple two-dimensional line-art drawing.  Not only would this be easier to strike, it would be easier to carve into a die face.  Most of this design could be created using a set of punches and only a little carving.  You see this in the beaded look to the lines in Æthelred's helmet... that was made by punching dots into the die face.  His jaw line and shoulder may have been relieved a little, but most of the design of his helmet is flush with the background, or field; only the outlines are raised.  Crosses were often featured on coins as Christianity spread across Europe.  These were not only popular with the people, they were popular with the moneyer, because they were simple to cut into the dies, and they didn't require as much metal to be moved when striking... resulting in more good strikes.  This design was from the early to middle part of the Medieval Era.

Now look at the gold coin.  See the horse and its shield-shaped armor, and the knight's helm, shield, banner, cloak, and especially his left leg are all raised from the field.  The whole design is much more "three-dimensional."  That means a lot of metal had to be carved out of the die... and a lot more metal from the blank had to be squeezed into the recesses of the die.  That would require more pressure.  It would also require more carving and polishing to get that much metal relieved from the die.  There is also more chance of a slip of the carving tool... and if the gouge can't be polished out, the die cutter has to reface the die and start over.  A design like this would be more likely from the end of the Medieval Era.

Coin presses were actually invented towards the end of the Medieval period.  These machines were faster and could generate a good amount of pressure by those day's standards... and they could also achieve a greater uniformity in striking the coins (where all the coins turned out looking the same).  In the 1500s, some governments tried to introduce them into the existing mints to improve production of coins.  However, the skilled tradesmen who made coins the old way resisted the change.  They didn't like changing the process they knew so well.  They figured a lot of people would lose their jobs if they started using these machines.  They were so successful in their rebellion that they delayed the introduction of the minting machine for around 100 years.

When the steam-powered press was invented in the early 1800s, regularly repeatable applications of higher pressure at higher rates of speed became possible.  Coin manufacturing became more efficient and uniform; larger quantities of high quality coins could be produced in shorter time.

Modern coin presses can press the dies into the metal planchets with hundreds of tons of force; therefore they can create large coins and medallions with high relief, as well as small coins, in very large quantities.  Coins today are made by the millions and billions.  Technological advances from the industrial age to the present have removed most of the factors of human fatigue and error from the manufacturing process, resulting in each coin of a particular type looking pretty much exactly like every other coin in that run.  Mints have also become capable of doing more interesting things with designs, such as adding more complex, intricate details, or striking coins on oddly shaped media such as curved planchets and other curiosities.

Choosing The Right Type Of Design

If you like one style over another, what difference would it make to you?  That depends on how important time, cost, and historical accuracy are to you.  Early medieval coins were simpler looking with less relief, while later ones could be more ornate.  It takes more time to produce an ornate coin that requires a lot of relief-carving on the die set; so if you're on a tight schedule, an early medieval coin design might help.  You will also need a die cutter with more artistic skill and experience to relieve a die than simple punching would require.  Highly skilled and experienced craftsmen are in great demand and are able to charge more for their work... and the more complex the design, the more time it will take and the more you will be charged.  But in the Medieval Era, even the best artisans could only do what the technologies of the times would permit... so if, for example, you want an early medieval look, a simpler design is better.  Study actual coins from the era you want to represent before developing your design.

Many thanks to Carson Engle (a.k.a. "Rüdiger of the Flaming Gryphon", reachable at twobearmint@gmail.com) of the SCA's Midrealm Moneyers Guild for his patient answers to my many questions!  I've thoroughly enjoyed learning about the process of medieval-style coin production.

Missed this when you first wrote it, very detailed and very well researched. You have a real talent for writing, look forward to your further musings.

I enjoy your blogs very much. From hammered coins to the steam presses that put out sixty to eighty coins per minute. The die sinkers would take weeks. Just for the detail. Mintages were low but the tokens and coins made at the Soho or Birmingham mint bacteria in the early 1700's were exceptional. Your blog blogs describe the process impeccably. And people should visit a Mint to each the way it's done today. I would love to see the stem processor at the CC museum . Still in use today. I live this part of the actually making the token coin or medal. To think of the tools then and the detail are remarkable. Thanks for another interesting blog. I do appreciate them. There very interesting and enjoyable. Thanks Mike.