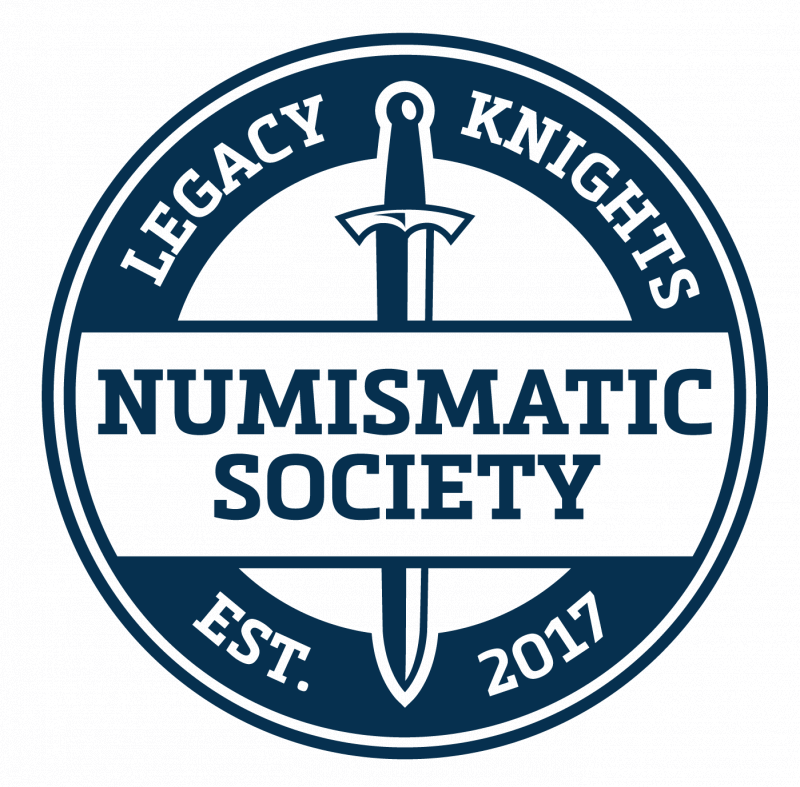 Background:  Ever since the beginning of the Legacy Knights Numismatic Society, as its coordinator, one of my dreams was to create our own coin.

Our club is an official extracurricular activity of our local Christian school.  Our school mascot is the Knight, and we are the Numismatic Knights; so a coin in a historic style of the Age of Knights with inscriptions and symbolism representing our club and school values would be ideal.

This was probably the hardest part of the process in designing a coin for our club, because we want to use these inscriptions for so many other things as well.  The design and translation are going to become part of our club's image and branding.  We wanted to "get it right" so we could be proud of it.

Creating An Appropriate Inscription For A Medieval-Style Coin

After doing some research on what coins looked like in medieval times and how they were made, I realized that any medieval-style coin worth doing should have some medieval Latin on it.  In fact, I saw it as such a key element to our coin that I kind of put the rest of the design on hold until I could work out the inscriptions.  Our club is for 3rd through 6th graders, so I did not try tasking them with a medieval Latin translation; so as their club coordinator, I took on this part of the project.

First problem:  I needed to decide what the inscription needed to say.  Since our coin is not actual money issued by a government, but more of a token representing our club, I felt the club name, instead of a country or monarch, would be an obvious choice for a legend.  Since most coins and many tokens have additional mottos that express some sort of ideal or value of the issuing entity, I chose the Four Rules of our Society:  1) have fun; 2) be respectful; 3) learn something; and 4) share your knowledge.

I broke down our club name grammatically.  This would be a coin of the Society.  Whose society?  The Society of Knights.  "Numismatic" could describe either the type of Society, or the type of Knights in this Society.  All 3rd through 6th grade Knights were welcome to join, but probably only numismatics-inclined ones would; so the meaning wouldn't change much either way.  "Legacy" described a value, but also a place named after that value (the school campus).  In summary, this coin would be issued by the Society of Knights Numismatic of Legacy.

The Four Rules could get too wordy for a small coin, so I sought to simplify them into one-word ideas for each rule.  I came up with four verbs:  Enjoy, Respect, Learn, Teach.

Second problem:  I am not a medieval Latin scholar.  However, I did the best I could with some basic Latin online translators, then checked their accuracy by digging around in some resources on medieval Latin.  I learned several things:

1)  As popular as Latin phrases and mottos have been in the past, there doesn't seem to be a lot of easily accessible comprehensive resources on the subject online... in part because it's a dead language, and a difficult one.

2)  There are some significant differences between original ancient Latin, medieval Latin, and modern church Latin.

3)  Some online translators are better than others, but none are perfect, and some are really bad.  They cannot be relied upon alone; you have to do some studying to recognize not only a more accurate word or phrase, but also the most proper form of the word in question, as well as the right word order for your phrase.

4) Even contemporary Medieval scribes and scholars found Latin difficult, as some of their inscriptions and formats appear to be "best guesses" or corruptions of ancient Latin; so a little leeway in coming up with the "correct" inscription is permissible.  However, taking too much leeway risks looking like you were just trying to be silly (think species-genus names for Wile E. Coyote and the Roadrunner).

5) There is also a lot to learn about abbreviated forms of medieval Latin inscriptions.  Depending on your inscription and how you abbreviate it, you may not need to be 100% accurate in choosing the proper word form, as the abbreviation may mask this.

6)  After searching all my resources, I wasn't sure what medieval Latin word would best describe the hobby we know as numismatics with the  highest degree of accuracy.  In medieval times, numismatics was primarily limited to the wealthy ("the hobby of kings"), since only they had the means and opportunity to pursue a collection; perhaps such a limited scope did not warrant development of its own specific term.  I ended up choosing "numismatæ".

Third problem:  I needed to find an actual scholar of medieval Latin to check my work.  I thought of contacting a Catholic priest, but Latin mass is not as popular as it once was, and understanding enough Church Latin for mass doesn't necessarily yield an ability to translate modern phrases into medieval Latin for inscriptions.  I tried a Biblical scholar I knew, but his studies were more in Hebrew and Greek, not Latin.

Finally it dawned on me:  since I'm trying to make a translation for a medieval style coin, maybe I should look for an expert specifically dealing with Latin inscriptions on medieval coins.  I contacted Doug Mudd, curator of the ANA's Money Museum in Colorado Springs.  I explained our goals, and then gave him my best guess and my rationale for it based on my research.  Doug gave me great feedback but then passed my questions along to an expert he knew who was intimately acquainted with medieval Latin inscriptions.  I was pleased to be told my guess was very close, or close enough for our purposes, remembering the leeway allowed mentioned above.  On the motto, Doug and his friend suggested a different form of the word for "honor" or "respect", but the rest was a good representation.  With this validation, I feel confident that we will have a Latin inscription worthy of putting on a coin.

The obverse legend will be:  "SOCIETAS MILITES NUMISMATÆ LEGATUM" - Society of the Knights (Numismatic) of Legacy.

Fitting The Inscription Onto A Coin

A medieval die engraver wasn't usually the one who translated phrases.  He likely couldn't even read in his native language, let alone Latin.  He simply matched shapes and carved them in the order presented to him.  He did know, however, how many letters he could fit on a coin; when the inscription was too long, he would say so, and abbreviations were determined.  Like today, words could be shortened by leaving letters off the end, or out of the middle, or both.  Letters left off the end could be indicated with a symbol.  They didn't necessarily use a period like we use today; they might have used what could be described as characters from the "wingdings" font in your word processor.  A line over a word could indicate the same.  Since circular inscriptions don't always make it obvious where to start reading, a special symbol, typically a cross, was used to indicate the beginning of the phrase.

We decided that if we needed to abbreviate, we could use:

1.  Preparation is the biggest part of a job done right.

2.  Study inscriptions from actual coins you're trying to mimic.

4.  If translating into a language with which you are not familiar, break down your phrases grammatically, and learn the proper grammatical structure of that language, as it is often not the same as your native tongue.

5.  Remember some words have multiple meanings; be careful to choose the right one.  Translating synonyms for the words you want will help you get a better idea of which word is most appropriate for your meaning.

6.  Be suspicious of online translators.  Use more than one if you can.

7.  Reverse the translation  of your translated word and synonyms back into your language to see they come out how you hope.

8.  Try translating phrases, as they often come out differently than individual words.

9.  Do all this BEFORE you try contacting an expert, then give them your best guess and reasoning behind it.  This shows you are truly interested in knowing what's right and why; an expert is more likely to respond to someone who shares their interests, desires to learn, and respects the time and effort it takes to become an expert; as opposed to someone who just wants them to do your work for you.

Many thanks go to ANA's Money Museum curator Doug Mudd and his anonymous medieval Latin translating friend for taking the time to review our work and provide feedback!  Thanks again go to Carson Engle (twobearmint@gmail.com) for providing insight into the life of a medieval die engraver for us.

Next up:  Part IV, Finalizing Your Design.

Interesting. So much work is going into this. Can't wait to see the finished product

Sounds like a great Token in progress, an dI would definitely be psyched for any part of the extracurricular activity, I can not wait to see what it finally looks like.

Wow! Good luck on this project! Can't wait to see the finished product. ; )

I hope you make your coin available to others that might want to buy one outside the club, sound like you are well on your way to a terrific product. Best of Luck and Amos, Amat, Amas , your hard work.

Your doing great. By the way it can be classified as a medal. My organization was. Maybe yours will be also. Like I said it can get hard at times but with your attitude there should be no problem. Keep up the good work. One day it will be delivered. A great feeling. Mike.

Thanks Mike, yep, we are thinking of having NGC look at them when we get some done. They will indeed technically be medals. We are asking our manufacturer to keep mintage records for us, in part for fun, in part to teach the kids about coin mintages and how that affects rarity. If NGC agrees to look at them that will teach the kids about the process of submitting items for grading and why that matters to collectors.

You have taken on a huge job. Good luck. I'm waiting to see your finished coin..