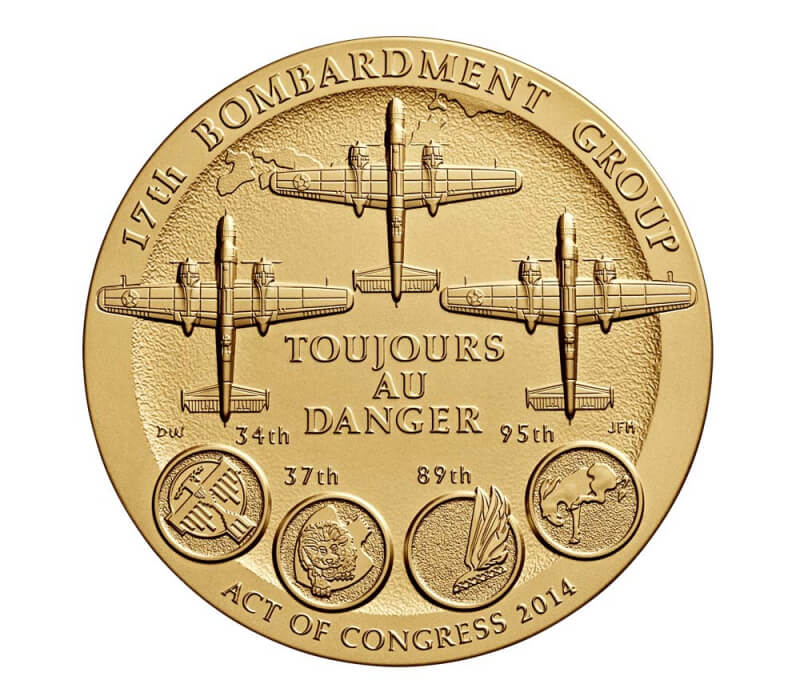 I enjoy history, particularly WW2 history.  I am not a frequent shopper of United States Mint products... not that I find anything wrong with them, but I've never been a mint set subscriber or anything.  I'd more likely buy a numismatic item I wanted at a coin shop or coin show.  But I have seen some of the Mint's commemorative medals, and some of them I like; especially some of the WW2 related ones, and a few Presidential ones.  When I read the news from Coin World Magazine that there was a tremendous price hike in the works, I thought I'd better investigate.

The United States Mint creates the Congressional Gold Medals as they become authorized by Congress.  Typically these recognize an individual or a group, and the reason or occasion for Congress awarding them the medal.  Medals have been awarded to military personnel (not to be confused with the Medal of Honor and other medals for valor), pioneers in medicine, science, aviation and space exploration, humanitarians, even entertainers and athletes.  US citizenship is not a requirement for recipients, you just have to be appreciated for some notable reason by the US Congress.  The Congressional Gold Medal has about the same level of prestige as the Presidential Medal of Freedom; however, far fewer CGM's have been awarded in spite of having been authorized for much longer.  The PMF has been awarded to over 500 recipients since its inception in 1963 during President Kennedy's term (with 102 awarded by President Reagan and 123 by President Obama).  By comparison, the CGM has only been awarded 163 times (as of April 2019) even though it has been around nearly 200 years longer, since the Second Continental Congress authorized it and first awarded it in 1776 to then-General George Washington!  It must take a great deal more cooperation to get two-thirds of Congress and their respective committees to agree on granting such an award, than for the President to decide you deserve recognition.  The CGM is not the kind of medal you wear around your neck or pinned to your jacket; it's more of a trophy type medal that you would display on your desk or in a prominent display case.

I can't confirm it but I've heard that the Mint uses the sales of CGM replicas made in silver and bronze to fund the production of gold medals.  That is what you are getting when you buy the 1-5/16" or 3" bronze or silver medals from the US Mint.   Congress does occasionally authorize actual Congressional Silver Medals and Congressional Bronze Medals to be awarded to individuals or groups.  Congressional Silver and Bronze Medals are rare, and are not the same thing as the replica CGMs made in silver or bronze that you can buy from the Mint.  Typically the Congressional Silver and Bronze Medals are awarded as part of an award of a Congressional Gold Medal, whereas the main person leading a group effort might get the gold, his chief assistants or officers would get the silver, and the rest of the crew would get the bronze.  This recognizes everyone's participation in the event commemorated at different levels of responsibility, activity, etc.; not to mention awarding gold medals to every individual in a large crew would be very expensive.  Everyone who receives a silver or bronze Congressional Medal still played a part in Congress's recognition that the event deserved commemorating by awarding the CGM., and their silver or bronze medal is proof of that.

As of this writing, 1-5/16" bronze CGM replicas are being sold for $6.95 plus shipping, and 3" replicas are being sold for $39.95 plus shipping.  $40+ for a bronze replica isn't hateful if you really like the topic, and $7+ for a smaller replica would make collecting them an affordable hobby.   Of the two, of course, the larger one is what I'd want.  I was hesitant to order, though, at that price, simply because it wasn't as high a priority as some other things.  Then Coin World Magazine announced in a Facebook post that the price of the 3" medals was going up.

Supposedly the Mint loses money on these things; and that's driving the price increase.  So now I wonder, how much have they been losing, and for how long?? because that's a pretty steep price hike.

So I finally jumped and ordered my favorite WW2 design, just in case the price hike story is really true (and if Coin World reports it, I have no reason to doubt them).

My favorite of the ones they have available is the Doolittle Raiders CGM replica.  First reason is, it's WW2 history and I am fascinated with the story.  Second reason, I live within driving distance of the original Wright Field (now Wright Patterson AFB) where Jimmy Doolittle spent some time before his famous raid (you can see photos of him with a Wright Field patch on his flight jacket); Dayton was also the hometown of his co-pilot, Dick Cole.  Thirdly, my son and I have actually attended Doolittle Raider events at the National Museum of the US Air Force there, with Mr. Cole present.  If you haven't seen a flight of 17-odd B-25's flying in formation and heard the collective rumble of their twin radial engines in flight, you've missed out.

So the Doolittle Raider CGM replica is a natural selection for me, and someday my son will probably have it.  If for some reason he doesn't want it, the price jacking happening this January will make $40 look like a bargain, and there shouldn't be any trouble selling it.  Unless, of course, the price hike has the unintentional consequence of killing the CGM replica sales program and none sell for $160.  I guess then, if Congress wants to issue a gold medal, we'll just pay for it in our taxes instead of by adding to our collections.

Maybe I can convince somebody to buy me my favorite Presidential 3" medals before Christmas.  :-)

Here's the link: https://www.coinworld.com/news/us-coins/price-for-3-inch-medals-to-quadruple-to-160-dollars I guess the prices of the smaller ones are going up too.

Really good blog! I like the Medal, but... the Mint has a lot to be desired anymore. They don't think about the small collector.

I would buy that one. My dad was stationed in Italy with a B-25 Squadron. Not at the new price , if it happens. I best buy it now if I'm going to do it. The mint quit making sense to me a long time ago. They don't care about us. Their customers are third party commercial buyers. Thanks.

Love the informative blog... Keep it up! Cheers, NumisMaster

Nice looking medal. Do not understand why the Mint foes as it does/

Love the medal, but make no mistake, tumble weeds will blow over my dead body before I spend $160.00 for that or any other medal. I love em, but NO! Then as you so aptly pointed out they will either cancel the program or take it out of tax money. Oh well. Thanks for a well done Blog, Later!

That's a lot of money to lose for such a long tie if they need to jump the price hat much. I thought they were steep prices to begin with, I hope all of their products don't get this far.

2014 Doolittle look's like a great medal. Thanks for posting, as I searched the U.S.Mint site and found some really interesting medals.

A 400% increase!!!! That is almost hard to believe even coming from our mint. I wonder if there was some unstated addition to the medal that justifies the huge price increase. Maybe they are making it as big as a dinner plate. (: Thanks for sharing your passion Dave, we don't see enough of you.

I'm a little confused. I get that allot it's easy. These are made of real gold? Because I think a three inch medal in gold would go for more than 39.00 even 160.00. I understand that they are replicas. But are they covered with gold.. I really don't understand a bronze medal going for 160.00. I wonder what happened. I didn't read coin world. But thanks for the heads up..

No Mike, sorry, there is no gold in them for that price, plating or otherwise. You would think there was but there's not.

Thanks for all of the info on the mint. They are truly great and beautiful medals. Thanks for an excellent blog....