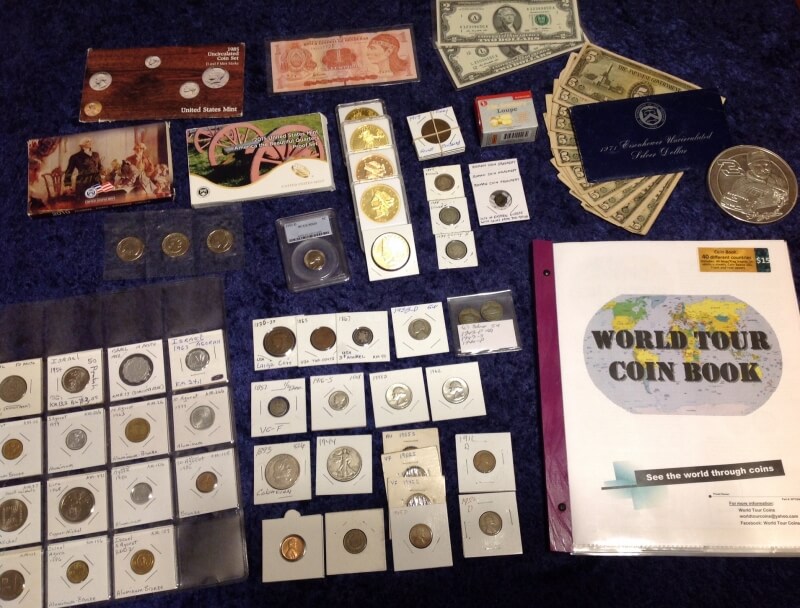 17 May 2018
One of our blogging cohorts here on money.org, Mr. Mike Burns, has recently described some experiences in the "you never know what you'll find" and "it could happen to you" categories, regarding rare varieties and rare finds.  He's right!  I've heard testimony from other members of local coin clubs that have even recently found some rarities in their pocket change and auction lots.

Our young numismatists club, the Legacy Knights Numismatic Society, recently had a "near miss" in the expensive variety category.  Our club periodically receives donations from other local clubs, coin shops, and individuals who are interested in supporting what we are doing, which is teaching kids about numismatics and developing numismatic curriculum ideas for youth clubs.  In one such recent donation, we received, among other things, a small group of US cents in 2x2s, including one 1917 wheat cent in about VG condition.  Now me being a relative amateur at this and not having all the rarities, key dates, errors and varieties memorized, but knowing such things exist, and knowing who the donor was, I decided to look up each coin in the donated grouping before putting them in our end-of-the-school-year student auction, in which they bid using our own version of YN dollars earned throughout the year.  Well wouldn't you know, there's a 1917 doubled die obverse variety that bumps that year coin from a few cents to hundreds of dollars.  In G-VG the lettering can be worn down a bit in spots, so when I looked at it, not being an expert grader, I thought it's possible the doubling could be worn to the point where you don't see the separation lines in the doubled letters and numbers, but you might see thickness or an off-centered look to parts of the letters.  I saw some letters, particularly the T's in LIBERTY and TRUST where the stems looked thicker than I thought they should and skewed a bit to the right, making me think it might have been doubled, but being worn from circulation, you wouldn't see the separation lines.  So I gave it to my local expert, who was going to see a wheat cent specialist at a show that weekend, and held my breath.  If this donation was really a doubled die obverse variety, we would have to consider whether or not it would be better off auctioned as a fundraiser for real cash that would give our club some much needed operating funds, for reference books, supplies, etc.  Another option would be to have a drawing for it among the student members.

Well, we got it back and the expert had said it was NOT a doubled die obverse, with the explanation that even on worn circulated ones like ours, you would see a split tail in the 9 in 1917.  So we put it back in the student auction and someone won it to add to their circulated wheatie set, where it will be enjoyed for what it is.  So even though we didn't hit the jackpot, it is still a happy ending to the story... and in the process we learned something from an expert.  I learned that each variety has its own telltale signature, and now I know to look at the tail of the 9 when examining 1917 wheat cents.

This also gives me the idea of asking our friend to see if his expert on wheat cents will come to our club and make a presentation on errors and varieties.  He probably has some neat examples to show us.

So four things:
1)  Read your Red Book and other reference books and get familiar with the varieties and errors that are out there.  The Mega Red Book has a ton of info in it, but so do other books.  If you specialize in something, get books that specialize in what you collect.
2)  Keep your nose in your pocket change, or the bargain bin at the coin shop.  New varieties are discovered from time to time, and even some of the old-timers aren't yet aware of them so that they've all been cherry-picked out of circulation.  Even older graded coins in a coin shop display case may have been graded before a variety was known to exist; take a look at them carefully.  You could find something big!
3)  Talk to an expert!  Most people are happy to share knowledge with you about their favorite subjects, and you can learn something new.  I learned about the 1917 doubled die obverse cent from my Mega Red Book, but I learned the split tail on the 9 tip from an expert.  They have details and tips you might not find in the books.
4.)  If you ARE an expert, consider sharing your experiences with inquisitive amateurs!  You can inspire a new generation of collectors, which you will not only find personally rewarding, but you will support future demand-- and hence values-- for items you already have.  People have to know why something is valuable before they will value it very highly.  The more you share your knowledge, the more people will understand the value.

Great blog! It's exciting to think "oh my gosh"..I really might have something good here! Glad you took the cent to an expert! I've looked at a lot of cents too thinking is that a doubling I see... Usually not...haha Thanks for doing such a great job with the kids!

It's sad some people leave comments without reading the blog and then they make a comment on speed reading or speed skipping. Leaving the important things you wrote. Mike.

Fun blog, good story. Keep learning & keep searching. There are some double die coins out there!

Good try. Well, I bet you know all the tells on that DDO coin now.. Great blog and great job with the kids. Keep it up and thanks!

Excellent blog. Working with kids is what this hobby is all about. Every thing you said is true. You weren't sure so you brought it to an expert. The right thing to due. Your also right about these rarities being found even in a slab. Your four ideas I agree with. I like the idea of sharing with other clubs. That's great. You guys and girls have it all together. It sounds like a great club. Just keep up the good work and there will be some great collectors come out of there. Congratulations and continued success. Mike.