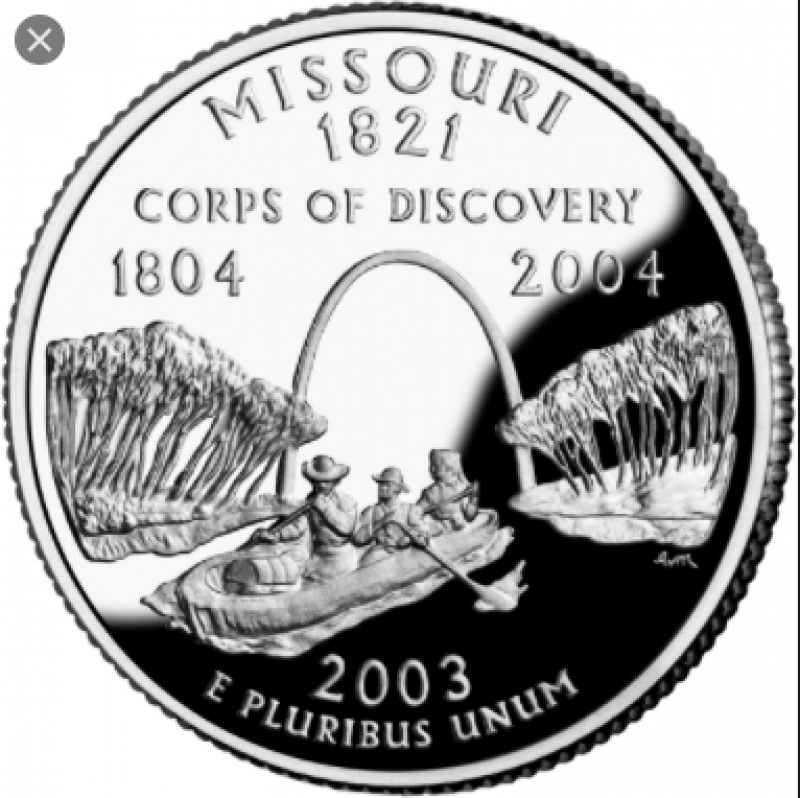 Today, we craw up the Mississippi River from Mississippi, to Missouri.

Excavations show that the Mississippi River valleys have shown continuous habitation since around 9000 BC. In about 1000 AD, the people of the Mississippian culture created regional political centers, one in Illinois, and one at present-day St. Louis. These civilizations began to decline around 1400 AD, and by the arrival of the French, most had already vacated Missouri. The land that would become the state was part of numerous territories, which changed hands about as fast as $100 lasts at the poker table. Rough, but barely enforced boundaries were set. However, the European's and the Indian's used the Mississippi River as a boundary of sorts. The first actual settlers, however, where French Canadians, who settled about an hour south of St. Louis, at Ste. Genevieve, which would become hub for the fur trade. Napoleon soon gained Louisiana for France, under the Treaty of San Ildefonso (recall to Louisiana when I said this was horrible for the Spanish). As part of the 1803 Louisiana Purchase, Missouri soon became an entryway toward the Western US, earning the nickname Gateway to the West. Soon after, Lewis and Clark left St. Louis on their expedition to the West. In 1826, due to the Missouri Compromise, the state became a slave state, and during the Civil War, the state functioned as a border state, meaning that brother often fought against brother. The state was important as St. Louis guarded the Northern Mississippi River. Since it was far from hotspots Tennessee and Virginia, most of the combat done there was guerilla warfare, with legends such as Jesse James, Will Anderson, and Will Quantrill. Also, the state served as the beginning of the ill-rated Pony Express.

During the 20th century, the state became one of the most restrictive states in the nation, with Sunday Blue Laws, plus more. Today, the state is known for the scenery, especially in the Ozarks, and the forests are very abundant. Famous citizens include Mark Twain, Harry Truman, Jean Harlow, and Tennessee Williams.

For the 25th time, when an amateur collector begins his collection of Missouri-related coins, he goes to his pocket change and pulls out the 50 state and ATB quarters (you should know how hard it is for me to keep this one sentence interesting). The Missouri 50 state quarter is interesting, with Lewis and Clark's expedition getting ready to pass under the Gateway Arch, on a riverboat. The ATB quarter features Alley Mill, at Alley Spring, a popular spot for visitors going to the Ozark Riverways, a large national forest with an awful lot of lakes, and cheesy, overly expensive amusement parks.

In 1921, the US Mint, seeing the success of Commemorative coins, accepted the proposal of the Missouri Centennial Committee to strike a silver half dollar to commemorate the 100th Birthday of the state. However, there are two varieties. A 2star4 is one variety, with the 2star4 above the 1821 in the date. People went crazy when they realized that there would be a variety. Today, the 2star4 variety commands a premium.

Thanks everyone! And see you further down the trail!

Note: The Lyrics when the song is Sung are incomprehensible. So here is a hint. Kurt. That's it.

Load up on guns, bring your friends
It's fun to lose and to pretend
She's over-bored and self-assured
Oh no, I know a dirty word

Fun blog! Enjoyed it. All of these coins are very beautiful! ; )

I like the design on this coin with the flowing creek. Nice blog as usual. I have been enjoying the information on each coin and learned quite a bit about the quarters. thanks

The 1921 Missouri commem is among my favorites, especially the reverse. I lived in Missouri for 6 months about 10 years ago while working for GM. Nice place and lots of good people. The Gateway Arch never failed to amaze me when crossing the river at St. Louis.

Great blog that's some what personal. My nephew is employed by the neighboring county as their historical researcher and travels quite frequently to points along the eastern shore of the Mississippi looking for Pre-Columbian artifacts in his spare time. He's found some fascinating things near New Madrid.

Nirvana-Smells Like Teen Spirit. Yep, I did a search for it. I cheated. So, nice blog. I really like the toning on that commemorative. I hope it is yours. Thanks for the history.

I have to say every time you write about these coins I take them out and look at them. Along with the reading of the blog a perfect day. Thanks!