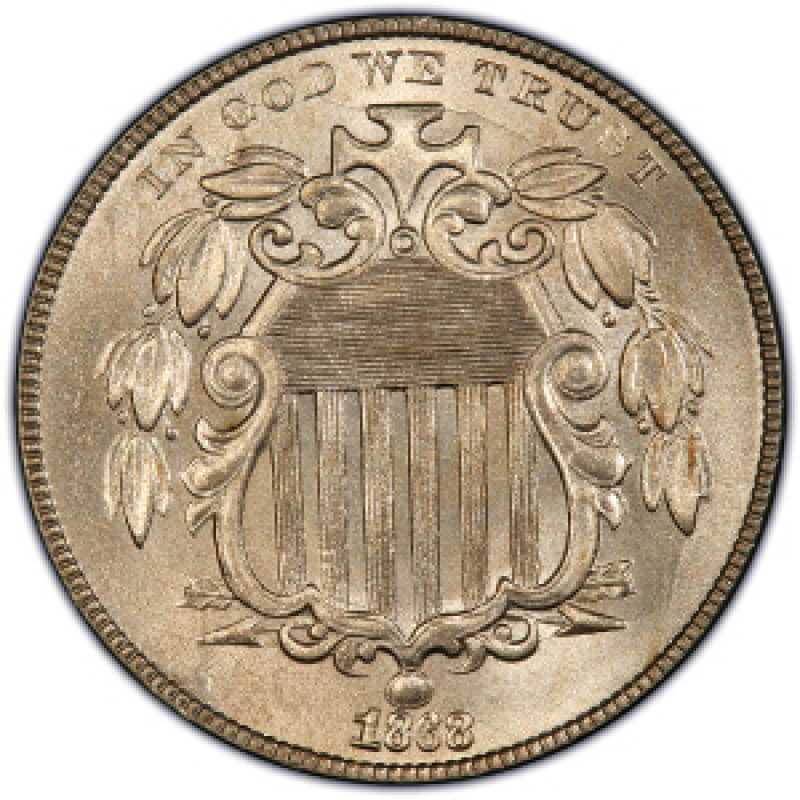 Todays blog is about the Shield Nickel. The act of May 16, 1866 authorized  a new five cent coin made of 25% nickel and 75% copper. This created the unusual situation where two coins of the same value circulated at the same time (the other coin being the Half Dime). A massive quantity of nearly 15 million "Nickels" was produced in the first year, partly to promote the new coin and partly because of the availability of nickel and copper compared to the higher cost of silver for Half Dimes. the first versions of the new Nickel had rays on the reverse, between the stars surrounding the large 5 in the center of the coin. These extra elements caused the coinage dies to fail early because of the extra pressure needed to strike the nickel alloy and to force the metal into the recesses of the dies. To correct this problem, mint officials ordered the removal of the rays in mid-1867, creating two varieties: With Rays and No Rays, both of which you will need for a type set. Striking problems persisted, resulting in a series of coins noted for inconsistent strikes and lots of die cracks. Thanks for reading my blog and have a happy new year!

I love those things! I actually only have a couple of them so it's one of the coins I revisit and learn about once in a while, thanks!!!

I loved this summary. Shield nickels have always fascinated me. This blog took me back to a few years ago. My grandfather left a big coin collection to my mother, be he unfortunately died unexpectedly to lung cancer before I was born. My grandmother and I are extremely close, and one day, she mentioned something about his jewelry box. I put two and two together, and asked her if I could see the container. She brought it out, and it contained 2 shield nickels, a half dime from 1867, some japanese pesos also called "mickey Mouse Money" and an old $2 bill. My grandmother gifted them to me, and I have cherished them ever since. (Aside from the half dime, which got stolen at a scout activity where I was aiding the scouts in getting their coin collecting merit badge. Rather ironic, yes?). Cheers, NM

Thank you!! I started a set of these...just a measly 6 nickels so far but I purposely sought out the die cracked specimens. I think it gives the coin a bit of character

Nice summary of a great early series. Thanks for your research.

I like the overall look of this coin, but. It's not on my list of collectables, I do have one for a type set. Nicely written and researched blog. Later!

Thanks for sharing! I didn't exactly dislike the design, but I didn't understand it either. I currently have only one spot for the shield nickel in my type set, but I plan to keep it this way for several reasons. Happy New Year!

Never liked the design. The shield does reorder the shield on the cent reverse. There is history repeating itself!

Not a fan of the design, but this set the stage for some of my favorite designs.

Nice blog! Thanks for your research ; )

Always liked the shield nickels. I have a couple. Thanks for a good blog.

Thanks for a good blog! I have a few but they are down the road for collecting a set. You did a good job!

The shield nickel has many varieties .