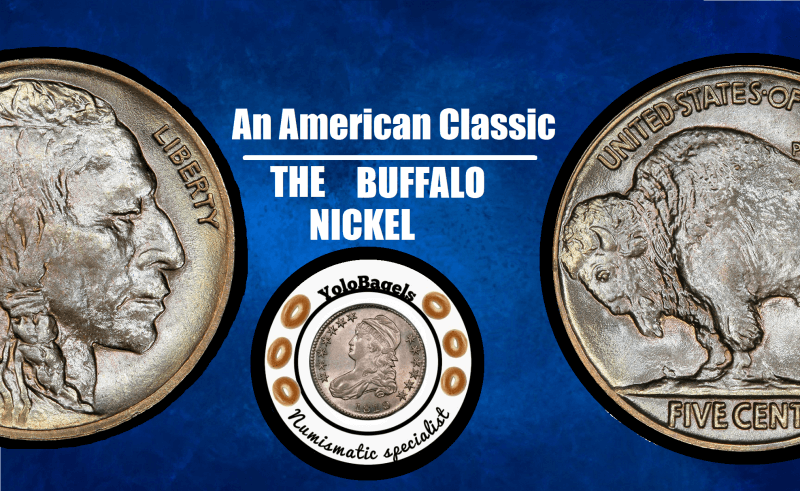 The Buffalo nickel, also known as Indian head nickel, is generally regarded as one of the most sacrosanct coins of the twentieth century. The obverse features an American Indian Chief facing towards the right, with the inscription "LIBERTY" and the date of its mintage (1913-1938) on the Chief's shoulder. On the reverse is an American Buffalo, for which the coin is named after. "United States of America", "E Pluribus Unum", and "FIVE CENTS" is inscribed on the reverse as well, with the mint mark located right under the buffalo.

The nickel is composed of 75% copper and 25% nickel and was designed by James Earle Frasier. In the early '00s of the twentieth century, the Taft administration, which was in power at the time, decided to do away with the antique-looking design of the Liberty Head "V" nickel which made its debut thirty years earlier in 1883. Seeking a less Victorian-esque design, the US Mint sought for sculptors/artists rather than full-time Mint engravers. It was through this search that the well-regarded Augustus St Gaudens was hired, and later James Earle Frasier, who would go on to put the Buffalo nickel design into circulation.

The first several specimens of the buffalo nickel were given out on February 22nd, 1913 by the Mint to the Native American Chiefs that participated in the 1913 National American Indian Ceremony. Frasier was paid $3166.15 for his work spent on the new design. On the fourth of March, 1913, the nickel was officially released into circulation. Very soon after its release, the new nickel design gained a significant amount of positive feedback and praise from the American public and media.

Even though the Buffalo nickel received high praise and recognition, it would be incorrect to say that the coin was not without its flaws. After a number of years, it was discovered that the date on the Chief's shoulder was one of the first aspects of the coin to wear away, often wearing out completely. In 1913 the nickel also faced changes to its design, creating what is known as Type 1 and Type 2 Buffalo nickels. Frasier eventually became unmotivated to work with the mint to repair the design as he had moved on to other works of art.

Buffalo nickels are by no means expensive. Common date average circulated examples can be found at coin shows and stores for a dollar each, and sometimes even less than that. BU and UNC examples will usually cost $40 and up, though depending on the date and mintmark can sell for significantly more (Usually early dates). There is also a "3-legged-buffalo" error on the 1937-D Buffalo nickel which commands a very large premium if an authentic example goes on sale, but be careful as this is also a highly-faked variety.

The Buffalo nickel has engrained itself as one of the most classic American 20th-century coin designs. It existed during a very complicated part of history and saw two world wars. An exquisite history and beautiful design make the Buffalo nickel a wonderful coin. Thank you for reading,

One of my favorite coins.

Buffalo Nickels have a great design on the obverse and reverse. A lot of the Buffalo coins have great color due to the fact that they have been close to chemicals and other metals!

Perfect timing for me to read this since tomorrow at our coin club meeting there will be a 1913-S Buffalo Nickel V-2 (ND) VG up for auction. Tempted....

Great read. While my collection of this series is rather light comparative to the other denominations I have always had a fondness for the design.

Same situation here. I started writing this blog after I won a PCGS slabbed buffalo nickel that had beautiful rainbow toning. Take care.

A very interesting blog on a classic American coin. Along with the Morgan Dollar in representing the idea of our old west. Thanks..

The buffalo really does give it that kind of impression, even though it didn't really circulate in the west during that period. Thanks for reading!

Buffalo Nickels are a favorite of mine! I finished my Dansco album of Mercury Dimes not too long ago. Now I'm working on my Buffalo's. Thanks a very informative blog. ; )

Congratulations! Mercury dimes were my first set too. They are very easy once you get past the 16D. Buffalo nickels shouldn't be too hard as there aren't any really tough dates.

Thanks, that's what I always try to include.

IMHO, the Buffalo Nickel is the quintessential American Coin and is also at the pinnacle of American Numismatic Art. For our 250th Anniversary, I would love to see a special set of coins, the Flying Eagle Cent, the Buffalo Nickel, the Mercury Dime, the Seated Liberty Half, and the Flowing Hair Dollar all dated 2026 and all in magnificent proof. (Mokie dreaming again). Thanks for your thought provoking blog, Y/B

If only we could see those, even if only for one year. There's something about the luster and surfaces from coins designed during the quintessential time that is just different. Thanks for the comment, Moke.

My favorite design. I have a nice collection. The Indian you refer to is a composite of three famous Indians the buffalo was named Black Diamond and found in the N.Y. Central Park Zoo!!. Just an add on . I enjoyed the blog of America's coin.

I wish I had known that earlier, thanks for the extra bit of info. Yes, it is a beautiful design.

Though the type-1 nickels had problems with the denomination prematurely wearing, artistically I prefer the type-1 over the type-2. I can't help but wonder why the date was not also re-designed to prevent premature wear.

Great blog, and this is the first I have seen from you. It truly is a classic, beautiful design.

Today at the Baltimore Coin Show i saw rolls of full date Buffalo Nickels for $25. I was so tempted to buy a roll. I did see a 3 legged for sale. Always have liked Buffalo Nickels since i was young. Thanks for the information on Buffalo Nickels.