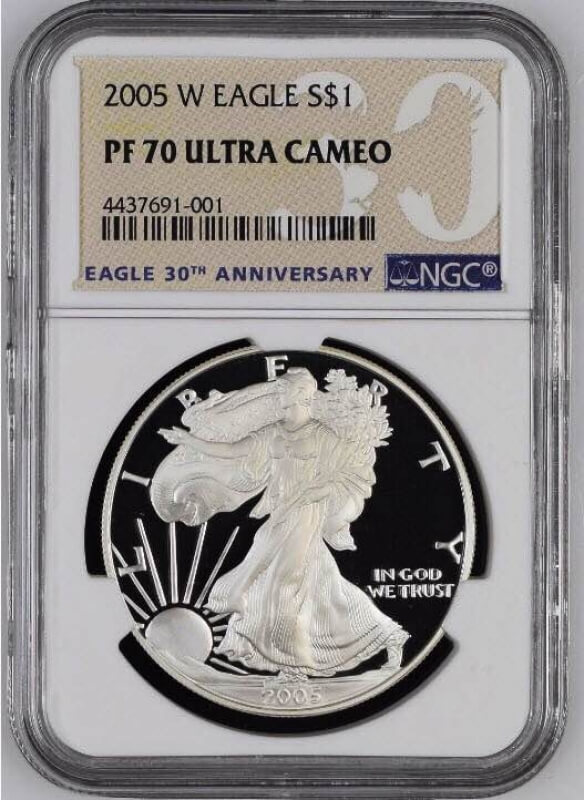 01 Nov 2016
In part one, I discuss bullion and commemoratives and part two will be for varieties, circulating coins, and similar stuff.
The American Silver Eagle, Britannia, Libertad, Sovereign, and Kookaburra are just some of the major bullion series currently being minted as you read this. But these mints also make proofs, in sets, in special editions, and in many more ways.  Some of these include the standard proof coin made every year, the five coin set for the ASE made in 2011, 200th-anniversary Brittish sovereign etc. That is why I am writing this.
I never was one for modern coins until recently I bought a 2005 proof silver eagle and then decided to grade it and it got a seventy. I know that the grade added value but exactly how much value? When looking online I found prices from $80-$150 which didn't help. Although this was pretty flat out compared to lincoln cent varieties, it is still hard to know when to grade and is it going to increase in price. Take the special sovereign sets coming out soon, the sets have limited mintages and collector's desire but are they going to be top notch value in ten years? Another British coin is the two-ounce queen's beast lion, with it getting such bad grading results the MS69's and seventy's will most likely have great premiums and they even do now. But did anyone see the possibility when this bullion series was released?
For coins made across the pond, the modern U.S. commemoratives, and Canadian Disney themed coins are something I do not see as a top dollar set. I believe New Zeland and Canadian fan coins do have premiums because of the mints, but it stops there. As for the American coins, some of them are worth double the spot value but are definitely not pushing top value too. I  am definitely not saying you should not buy these, I just believe that there is not a wide demand for them and the premiums are not top notch.
A topic I have not brought up too much is graded bullion, it adds value but a whole lot. I find it cool to know that you have a perfect coin but it really does not matter too much to me, and if it gets a 68 or 69 you may even lose money.  This is not something that I tend to do for the reasons I just said, but it would be great if you told me your opinions on it down bellow.
Thanks for reading,
Bryce K.

Modern coins are as cool as classic coins!

Modern coins do not get the attention they deserve. The Mint produces beautiful work.

Great blog! I really enjoyed reading it. I collect some slabbed modern bullion "coins" from all over. It can get crazy with the values though. Especially with a fluctuating metals market. I say collect what you like.

I just reerealized we don't follow each other. So here is a message. We forget as collectors that the old coins we collect now we're once modern coins to collectors years ago. They held on to to them and did benefit. That's why you have to be careful on what modern coins the experts talk about. They way the pricing goes. Does it go up or stay the same. Again all depending on the coin. Take care. And be picky.

The first thing is good blog. Pricing is something I don't think anyone can predict. Bullion no matter if it's an eagle or any other type will be based on the complete set. They sell modern coins for eighty to a hundred dollars. You can pay 150 for an eagle but unless silver hits 50 dollars your only going to get what the market says. However if you have the complete set that's a different story and they should be the same grade. Then you will get a good price. Thanks!

A coin is only worth what someone is willing to pay for it. Bullion coin collecting can be nerve racking as the price of the base metal changes like the wind.

Interesting article! NGC offers the value on almost all coins that they grade. Your American Silver Eagle is worth about $105 based on their website. https://www.ngccoin.com/certlookup/4437691-001

Yeah, I checked them out before. Good you told me about that price!

Hi! One must remember in coin collection it's not always the value of the coin. It's the history of it the maker of it where did it come from do you enjoy the coin. These are just a few reasons people collect. Your blog was very good I enjoyed it very much. But there is a lot more than value to a coin. Sometime your holding a piece of art in your hand. I enjoy the different designs and most of all the history. Keep up the good work! And enjoy!

Yeah, but I brought that up because unfortunately I've lost a lot money with modern coins, so that part of it has stud out to me

Nice blog. It is nice that you have an idea on the way you want to go with the hobby.

thanks, modern and eac are the stuff i like