At the end of the Revolutionary War in 1783, the founding fathers considered a monetary system for the new nation. Unfortunately, the war had left the country deep in debt, making progress difficult. Ratification of the Constitution in 1789 gave the federal government the exclusive right to produce coinage and provided for the establishment of the United States Mint.

1792 was a busy year for American numismatics — Congress established the United States Mint, approved a Mint Director, purchased a plot of land in Philadelphia, erected a building, hired employees and began experimenting with coin designs.

In July 1792, before work had been started on the new U.S. Mint, the first U.S. coins were struck for distribution in a basement close to the site for the new government facility.  The coins were received by then Secretary of State Thomas Jefferson, who provided $75 silver, according to notes discovered recently by researchers in a memorandum book written by Jefferson.  The same memoranda record that he circulated the newly struck coinage of 1,500 half dismes (5 cent pieces) on his journey back to Washington, D.C., giving the nation its first experience of the new decimal coinage approved by Congress.

New evidence suggests through die studies that there was a subsequent striking of several hundred more half dismes months later in October, when the new mint buildings were completed and the new striking equipment was being tested. There are approximately 250 – 300 surviving half dismes today. The ANA is fortunate to display two examples of this rare and historic coin, including the finest known example that may once have belonged to David Rittenhouse, first Director of the Mint.

The coins feature a bust of Liberty facing left with “1792” below the bust and the legend “LIB(erty) . PAR(ent) . OF . SCIENCE . & . INDUSTRY .” around. This obverse legend is attributed to Benjamin Franklin and suggests the connection between liberty, knowledge and hard work. The reverse has an eagle with outstretched wings with “HALF / DISME” and a five-pointed star below and the legend “UNI(ted) . STATES OF AMERICA” around. 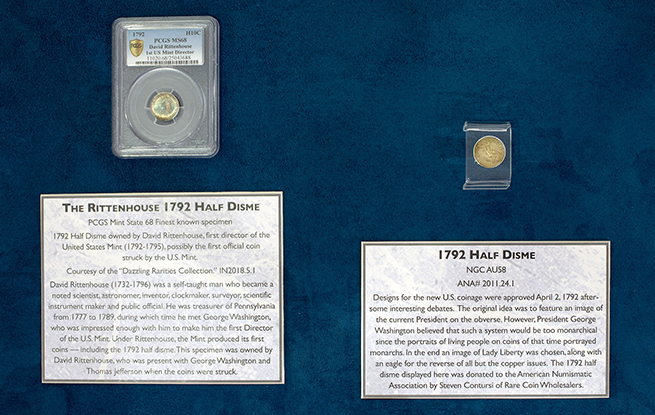