On April 2, 1783, Robert Morris recorded in his diary the delivery of “a Piece of Silver Coin being the first that has been struck as an American Coin.” Morris, who was responsible for financing the Revolutionary War, had been appointed first Superintendent of Finance of the United States in 1781. Shortly after taking office, he set about devising a new system of coin-age for the fledgling nation.

For nearly two centuries, North America had been a financial Tower of Babel. English law forbade the colonies from striking gold and silver coins, and the mercantile system operated in such a way that British coinage was scarce outside the mother country. Consequently, a hodgepodge of Spanish, French, British and Portuguese currency circulated in the New World. These coins were struck to different standards of weight and fineness, and the existing European monetary systems were forced to rely upon complicated fractional math that had been in use since the Roman Empire.

Morris determined that the highest common divisor among the money commonly encountered throughout the former colonies was a quarter grain of silver. He established this as his basic unit, and—in a stroke of genius—abandoned fractions altogether and proposed the first monetary system based on decimal math in Western Europe and North America.

Alexander Hamilton visited Morris on April 9, and the two subsequently corresponded on “the subject of the Coin.” Morris then pressed Dudley to “produce the Coins to lay before Congress,” which the latter delivered on April 22. This set was then sent to Congress, and later forwarded to Thomas Jefferson for his comments.

Hamilton and Jefferson became the principal architects of the U.S. monetary system, both advocating the adoption of Morris’ decimal structure. Over the next century and a half, the dollar would become the world’s reserve currency, and decimal coinage would supplant all other monetary systems completely by 1973. Today, virtually every major financial transaction in the world is carried out using money that is arguably descended from Morris’ prototype.

Despite its influential role, Morris’ coin was forgotten. While historians and numismatists have been aware of his diary entry since the 19th century, no researcher has ever attempted to determine exactly which piece of silver changed the nature of money and, consequently, the world we live in. The evidence needed to reach this conclusion can be found in the writings of Morris and Jefferson, the papers of  the Continental Congress, and the forensic evidence contained within the coins themselves. 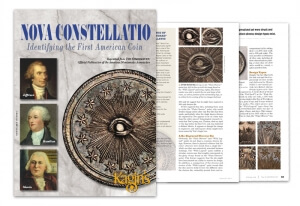