Money is anything that people will accept as payment in exchange for goods or services. Evolving for the last 10,000 years, the earliest forms of money offered a system whereby people could determine the comparative value of items (for example, an axe or a cow). Money facilitated more than just buying or selling things — it became a mark of status — a characteristic it retains today.

Eventually, someone came up with the idea of using precious metals (gold, silver and their alloys) as money. About 4,500 years ago in Mesopotamia and Egypt, gold and silver began to be traded in the form of metal bars or bits of wire. Another big development occurred around 650 B.C., when small, round lumps of electrum (a naturally occurring alloy of gold and silver) were produced in a standard weight and marked by the issuer. These were the first coins known to man. Since then, the appearance of coins has changed, but their purpose as a monetary instrument has not.

First documented in China in the 8th century A.D., paper money has become the most prevalent medium of exchange, with the possible exception of credit cards.

Find out more about all types of money, along with emergency money, tokens and other currency, as you explore the HISTORY OF MONEY exhibit! 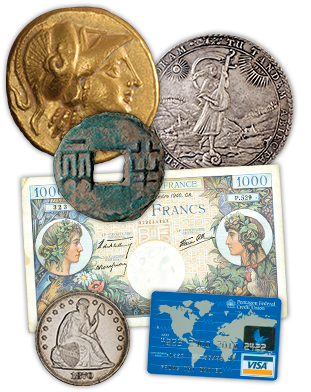 Click below on the exhibit case that you would like to view. More cases will be added periodically.
Click here to go to the main History of Money Exhibit page.

The Revival of Coinage View Case

The End of the Middle Ages View Case

The Rise of Islam View Case

Coinage of the Confederation View Case

Currency of the Revolution View Case